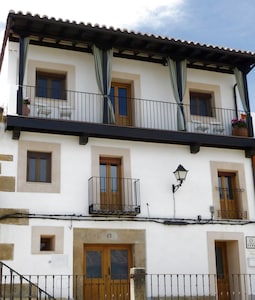 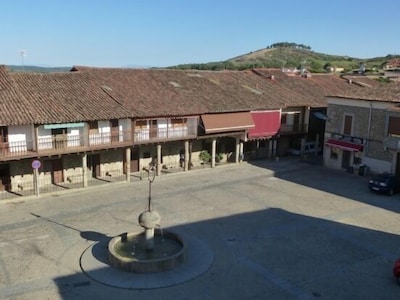 Upper apartment wit 2 bedrooms (4-6 persons) 80 m2: On the second floor the apartment has a very spacious living/dining room with an open kitchen (with dishwasher) and doors to the porch-balcony which extends over the complete width of the house and offers an excellent view over the square, the historical heart of Cuacos de Yuste and the green tops of the surrounding hills and mountains. This apartment has two double bedrooms (each bed 180 cm width, can also be converted in individual beds), each with its own bathroom, one on the first and one on the second floor. In case more than four persons use the apartment, a comfortable and high quality sleeping couch (140 cm width) is available in the living room.

Check in after: Flexible
Check out before: 11:00 AM

I´m Dutch and live since 2009 in Spain. From the first moment (beginning of 2014) we arrived in the village, Cuacos de Yuste, we´re in love with the square ´Plaza de España´. We´re still in love and like the square so much that since april 2015 we own a ruin at the ´Plaza de España´. We ´re going to do it again, transform a ruin into a beautiful home (2 apartments), where I hope many people, from March 2016, will have a wonderful time.

Leonne Gerbrands purchased this Cottage in 2016

We offer two holiday apartments for rent on the central square of the historical village of Cuacos de Yuste, at only about 2 hours west of Madrid. The apartments are named ´Entre Fuentes´ (‘In between springs’), as a reference to the many springs with crystal clear water you can find throughout the village of Cuacos de Yuste and the area ´La Vera´.