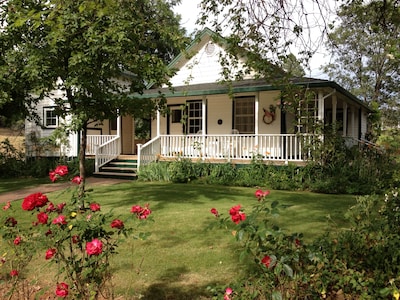 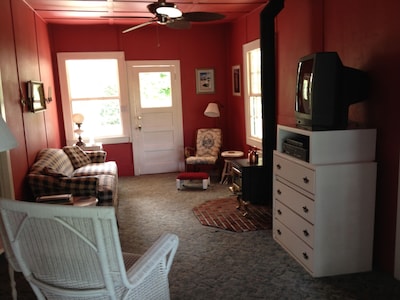 Under California’s Regional Stay Home Order, non-essential travel is currently unlawful in many parts of the state. We encourage you to learn more about restrictions that may be in effect in your destination before booking.Learn more

1893 vineyard cottage at the gateway to Yosemite.

All bed and bath linens are upgraded.

Ask a question
Member Since 2012
Cliff and Mary Lou Gardner is a Premier Host·The owner or manager of this property consistently provides great experiences for their guests.

About Cliff and Mary Lou Gardner

Mary Lou was born and raised in Yosemite Valley, and knows the Park extremely well. Cliff is a retired aerospace project manager. Mary Lou and Cliff were married in Yosemite in 1966. They retired to the property in 1997. The property the cottage is on was bought by Mary Lou's parents in 1959. Mary Lou and Cliff took over the property in 1989, and planted the first 5 acres of the vineyard in 1992. They retired to the property in 1997, and built a house in the middle of the vineyard. They have used the cottage as a guest house every since. Now they have decided to share this special place with others. They sell all of their grapes, except enough to make a couple barrels each year.

We have spent weekends and vacations in this cottage since we were married. Mary Lou's parents built a house on the adjoining property and retired there in 1971. All four of our children first stayed in it when they are 6 to 8 weeks of age. It was a very special place to visit Grandma and Grandpa. When Mary Lou's parents had the property, they raised a few head of cattle, so the grandchildren got to help with the roundup and branding. Now they help us make our wine, including stomping the grapes! Our Grands think that is great fun.