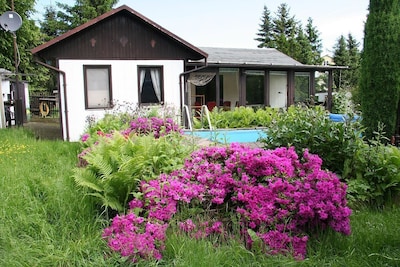 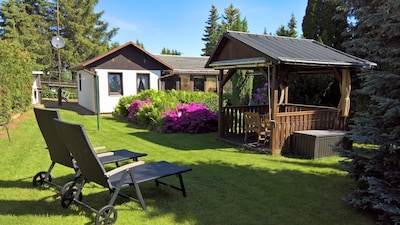 Detached holiday home with exclusive pool use close to Dresden

The house is located in the charming mountain village of Maxen about 10 km from Dresden. Maxen is both famous for its interesting history (the most famous battle in the Seven Years' War - known as the so-called Finckenfang - took place at Maxen) as well as for the beautiful hilly landscape in the run-up to the Eastern Ore Mountains and against the bizarre sandstone backdrop of Saxon Switzerland. The Eastern Ore Mountains and Saxon Switzerland are in the immediate vicinity and can be reached by car or train within a very short time.

Maxen is a very interesting place, especially from a cultural point of view. Already in the 19th Century was a meeting of artists. For example, the Danish fairy tale poet Hans Christian Andersen or the painters Johann Christian Clausen-Dahl and Caspar David Friedrich were guests at the Maxener Castle, which still exists today.

In the meantime, an art scene in Maxen with several galleries and cafes has established itself again. There is the Listhus - a seductive place with imaginatively arranged art objects, the Kunsthof Maxen, in which an extensive seminar program and a century-old atmosphere stimulate artistic work, the castle gallery and probably the smallest museum in Germany - the Linden Museum Clara Schumann in Schmorsdorf near Maxen , In the summer months, various theaters and shows take place on the Maxen natural stage