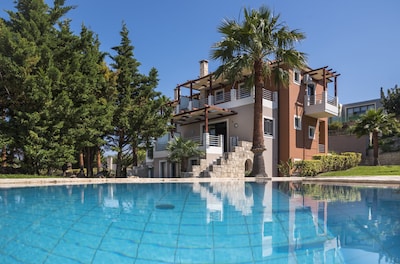 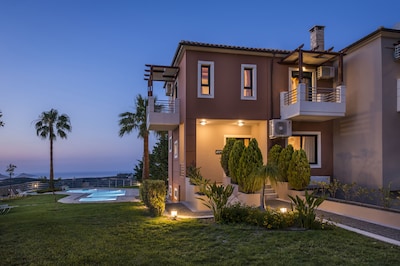 Villa Myrtia, one of Athina Luxury Villas with Private Pool and Unique Ocean View in Maleme, Platanias, Chania, 3 bedrooms,sleeps up to 7

Check in after: Flexible
Check out before: 12:00 pm

The nearest beach of Maleme lies at a distance of 4 km, it is sandy and offers many opportunities for water sports. There are also quiet locations for guests to enjoy the beach without being annoyed by nearby jet-skiers or water-skiers. The sandy beach of Platanias features many beach clubs as well as other opportunities for entertainment. The beautiful beaches of Falassarna, with the archeological ruins, as well as Elafonissi, with the impressive pink sand, lies at distances of 20-60km.

The nearest airport of Chania (CHQ) is located 32 km east of the villas, while the port lies at a distance of 26 km. The driving distance ranges between 30-40 min., while there is also the possibility to arrange free transfer to and from the airport.

The airport of Heraklio (HER)is another 160km to the east, that is a 2h.15min drive. A car rental can be arranged to pick you up at the airport and drive you to your villa.

The nearest village of Maleme lies 4 km north of the villas, while the beautiful city of Chania with its picturesque Venetian Harbour lies at a distance of 19km. Chania is considered one of the most beautiful cities in Greece, often called "Venice of the East" due to its many influences from the Venetian Rule. The city itself is a living museum and while walking in the Harbour you will have the opportunity to admire the ruins of Ancient Kydonia, the Minoan city which was discovered under Chania.

Local convenience stores, supermarkets and banks can be found both in Maleme and Platanias (that is within easy reach, 5-10 min. drive). The Water Park Limnoupolis lies at a distance of about 15km, in Varipetro, being an ideal destination for young children.

I am Athina Stefanoudaki, the owner of Athina Luxury Villas. The name of my home village is Xamoudochori, west from Chania, Crete. It was here I grew up and the surroundings of the village are extraordinary beautiful. I can not say exactly when I realized that this is a truly treasure. This could and should be shared. When I got the opportunity I decided to build Athina Villas so visitors also could enjoy this topic. It is indeed a positive experience to stay in this natural and rural environment, so comfortable so both body and soul can relax. Villa Kissos and Myrtia were finished 2004 and later on Rodia 2006. Here everybody can be absolutely ...We are four persons working together to keep the villas with gardens in an immaculate state. It is very satisfying when guests leave content

Boasting an outdoor pool, Athina Luxury Villas offer accommodation in Xamoudhokhórion. Chania Town is 17 km from the property. Featuring a terrace, the accommodation is equipped with a dining area and a seating area with a satellite flat-screen TV. Some units feature a balcony and/or patio with sea views. All units include a kitchen equipped with an oven and toaster. A refrigerator and coffee machine are also available. Towels, bed linen and bathrobes are provided. Air conditioning comes standard. Elafonisi is 37 km from Athina Luxury Villas, while Georgioupolis is 42 km away. The nearest airport is Chania International Airport, 28 km from Athina Luxury Villas. This property is also rated for the best value in Xamoudhokhórion! Guests are getting more for their money when compared to other properties in this city.