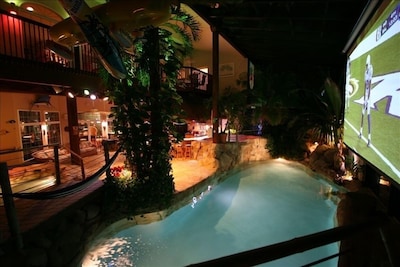 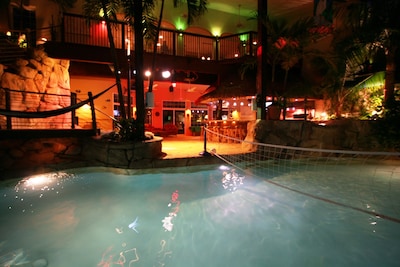 Ask a question
Member Since 2007
Owner is a Premier Host·The owner or manager of this property consistently provides great experiences for their guests.

The owner is an award winning designer/developer who has worked with theme park architects and engineers to create this ONE-OF-A-KIND paradise which is more than a luxury estate. It is an entertainment venue where parents and children can have fun and quality time together.

Owner purchased this estate in 2001

THE LEGEND OF KUKLAMUNGA FALLS Years ago, when rivers and streams doubled as America’s highways, Ridley Creek was a popular trade route for Minquas and Susquehanna Indians. Minquas Path, behind the house later became known as The Great Trail and was used to transport thousands of beaver skins to the first Dutch trading posts on the Delaware River. One cool evening, Chief Choo stumbled away from a campsite along the trail and returned telling tales of a tropical rock canyon with warm waterfalls and hot water swimming holes. Most thought Choo was crazy or “kookoo”, but he soon was joined by a host of good friends who would bring food and spirits and sneak off to the falls. These people became known as the Kookachoos, and they called the falls “Kuklamunga”. These customs were passed on from generation to generation until the falls were tragically buried by the construction of U.S. Route 1. Giovanni Cacciutti learned about the Kukachoos and stumbled across a map of Kuklamunga Falls while researching the roots of similar-sounding names. In the year 2000, they excavated the canyon down to the rare geocentric fissure that is responsible for the tropical anomaly and designed a house around it. Welcome friends and guests to Kuklamunga Falls. Together we hope to carry on the legacy of the Kukachoos.