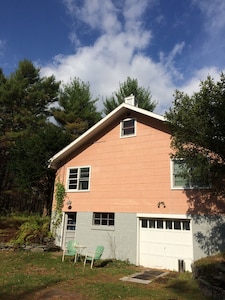 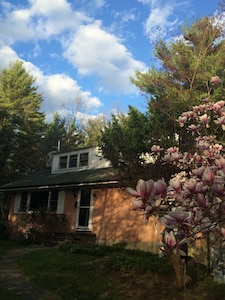 Only the third owners of Big Pink, my wife Susan and I are from New York State, Susan from the Adirondack Mountains near the Canadian border, I am from downstate in Westchester County. We both have a deep abiding love for nature. My first time in the Catskills was for the original Woodstock Music and Arts Festival in 1969, when I was in high school. In the 1980's, I was the live sound man / production manager for infamous NRBQ band, most of whom lived in Saugerties, and often played the legendary Joyous Lake club in Woodstock. It was from those years that I came to love the Woodstock-Saugerties area, and when a friend who was living here told me that Big Pink was up for sale by owner in 1998, after 6 months, and 3 failed attempts to sell to to someone else, Suzy and I became owners. As a musician guitarist/songwriter myself, of course I was aware of the history of Big Pink, but we ended up buying it mainly because we loved the land and the setting: the best rehearsal and jamming space in the world was for me, of course, a notable bonus! We love living in this area, with a diversity of people, music and artists venues, restaurants and cool streams to swim in during the hot summer.

You will be staying at Big Pink, arguably the most famous house in rock history. (See Wikipedia for story- Big Pink House). As owners, and having it as a home for over 16 years, we have tried to maintain the place as pristine rural sanctuary from urban hustle-bustle. This is because we believe that first and foremost, this house was indeed a creative retreat for those road-weary musicians, where they could enjoy some undisturbed peace. We hope that now it can be a source of inspiration for you, during your stay. It is just under a 2 hour drive to NYC, and only 45 minutes from Albany, NY, which has an international airport, and 20 minutes from the Rhinecliff/Kingston Amtrak station.

You will be very near to both the village of Woodstock, and the Town of Saugerties. It is close to Levon Helm's Barn, home of the Midnight Rambles, as well as the nationally renowned equestrian center, HITS ( Horse show In The Sun), Rhinebeck, NY and to the north, Hudson, NY. You are not far from Bearsville Theater, which hosts notable concerts, and the local Woodstock music venues of Catskill Pizza, Colony Woodstock, as well as those of Kingston, NY, just to the south. You will be among the very few to have spent the night at this place that has become a pilgrimage place, and considered by some the birth-place of the genre Americana music. Our guests have usually remarked on the peacefulness and being inspired in their creative pursuits: musicians write songs, writers come up with ideas. It can be an ideal retreat for the creative, or just a place to celebrate life. Be aware that Parnassus Lane, a co-owned private road, is unpaved. There are blue stone steps & pathway to the side entrance ( which is actually the main entrance) to Big Pink, and a staircase takes you to the 2nd floor Dormer: from there, you have views of Overlook Mt and the field and pine forests surrounding. These Whispering Pines were celebrated in song, and wildlife such as deer, wild turkeys, migratory birds and black bear are often seen, and need to be respected.