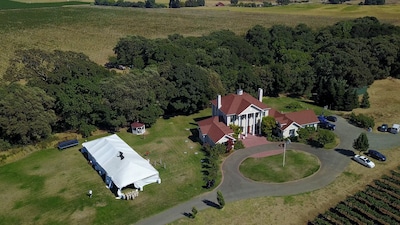 Gary built one of the most successful corporate housing companies on the East Coast which was sold to Equity Residential in 2001. He retired a year later and began the first of many expeditions to six continents. Ying was a national tour director in China where the two met in 2002. Gary and Ying were married in 2008 and settled in Fairfield, California where they operate summer camps for Chinese youth through the American Chinese Cultural Exchange Service.

Gary Bacon purchased this Estate in 2016

The inn was built in 2004 as the principal residence at Monroe Ranch which had been in the owner's family since 1860. A lifelong devotee of George Washington, the residence resembles Mt. Vernon, Washington's estate in Virginia. The home had been used for weekend retreats by the family whose principal residence was south of San Francisco. With eight bedrooms and seven baths, the home was easily convertible into an inn.

The property has a unique history including the fact that it was once the site of 'Big Camp' a 1000-strong Chinese settlement along the banks of Suisun Creek where railroad-weary workers lived and farmed the land for area ranchers. The property is surrounded by vineyards and farmland. Fifty-eight magnolia trees and a single remaining 100-year old pear tree line the quarter-mile entryway to the inn. Over forty variety of birds enjoy fruit from our trees during the day and at night scores of constellations are easily identified.