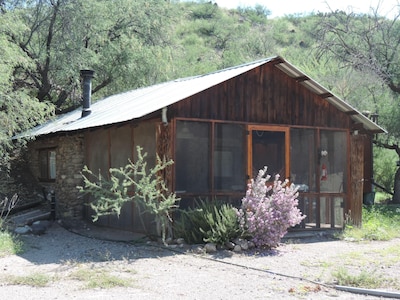 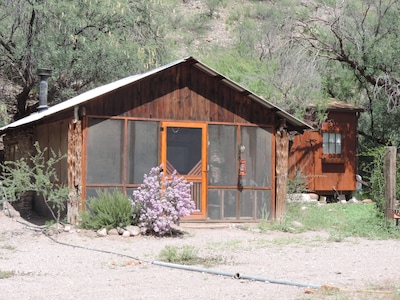 A River Rock Cabin in Cascabel

Double Beds (1) standard double bed, Double bed in the Penthouse also. That is rented separately for a small fee, less for long term stays. Please negotiate with owner. That space is not rented to anyone else, only to those staying in the cabin.

I left the east coast in '94 after a disastrous downsizing of the company I was working for and of course it was a gift in disguise..... once I got my feet firmly planted again. I opened a boarding stable in Tucson and ran that until the city grew too big and close. So I moved out to the wilderness and started over again. It has been such a gift and I don't know that, if I was ever given the chance, I would have thought I would be allowed to choose such a life. The experience has been enhanced by living among a thriving, tiny community of people seeking the balance of what's best for the land and for themselves, making the land and its wild animals an equal partner in the equation. We are doing conservation ranching, preserving an entire canyon while bringing it back from overgrazing, running cattle on range and on irrigated pasture, selling grass fed beef. None of this takes place on this property, but on the thousands of acres of range land and pasture some miles from here. I say this because I've had people ask if there was butchering or branding or whatever going on here. No there isn't. Formerly I was married, living in Conn and eventually divorced and raising a daughter by myself. I worked as a professional photographer for 30 years while also working in printing and publications. My MA degree was from Syracuse School of Journalism. Horses were always a large part of my life, even tho' I never owned one as a youngster but the time came when I had to let it all go. It was only in retirement that I was able to bring these fabulous animals back into my life.

Sue purchased this Cabin in 2005

When I was looking for property and came upon this place, I was really struck by the old cabin built into the side of the mesa. I could feel its potential and also its history. Once I settled in with the animals, I turned my attention to the cabin and saw, once I got windows in and opened it up, how welcoming it was. As was the land. The land is in one of the last remaining old mesquite bosques, very near the river, surrounded by desert leading up to mountains on both sides of the river. This is like a national park or refuge and is actually being considered for that status.

The energy of the surrounding land is palpable. Native ancient populations lived here in great numbers and on the mesa above me is one of the largest documented villages. It is now under conservation easement. Baicatcan. The hiking or riding in the valley takes you into unspoiled deep wilderness. Before I moved out here, each time I visited the valley, I could feel my whole body expand and relax and let in this clean air and wide open space, the amazing quiet and peacefulness. It is possible to do a Spirit walk with some Native American neighbors, if you ask me to arrange it.