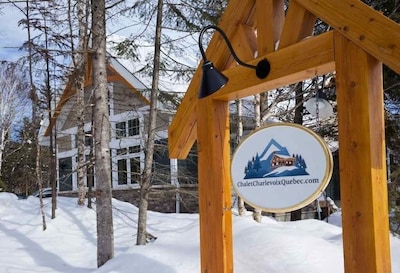 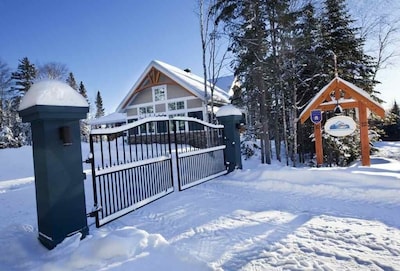 Monia Otis and Matthew Steiche, Owners and Property Managers of Villa Chalet Charlevoix Quebec, fell in love with the beauty of the Charlevoix Region of Quebec during a weekend winter getaway in 2010. We vowed to one day realize our dream of building a luxury cottage for our guests, our friends, and our family to enjoy year-round. Villa Chalet Charlevoix Quebec is our expression of what a luxury chalet should embody.

Give your group affordable luxury and fun, memorable experience that few other chalets in the region can offer. Book your next dream Charlevoix vacation with us for the best value per square foot in the region! Welcome to our dream Quebec chalet – Villa Chalet Charlevoix Quebec, a luxury four-season vacation rental within minutes of the highly sought after destination of Le Massif de Charlevoix, in Quebec, CANADA. We feel a chalet in Quebec should be in harmony with nature, and blend into the regional landscape. Therefore, Chalet Charlevoix Quebec decor is dominated by earthy tones, with hardwood floors, slate tiles and granite counters bringing out beautiful hues of blues and browns. It is nestled amongst the diverse trees of the local boreal forest, with multiple decks and an outdoor covered porch area with a spa, allowing for year-long soaking after a long day of play while exploring the Charlevoix region. The Charlevoix region has a rich history as a sought after vacation destination. The Charlevoix region includes parts of the north shore of the Saint Lawrence River and the Laurentian Mountains region of the Canadian Shield. This dramatic landscape includes rolling terrain, fjords, headlands and bays; the region was designated a World Biosphere Reserve by UNESCO in 1989. The region was named after Pierre François-Xavier de Charlevoix, a French Jesuit explorer and historian who traveled through this region in the 18th century. The nearby community of La Malbaie is known as the first resort area in Canada. For much of its history, Charlevoix was home to a thriving summer colony of wealthy Americans, including President William Howard Taft.

Villa Chalet Charlevoix Quebec is centrally located in the village of Petite-Rivière-St-François, just 10 km east of Le Massif de Charlevoix ski resort and 50 km east of Mont Sainte-Anne ski resort. Just 10 km east is the internationally renowned artisan town of Baie-St-Paul and the Casino Charlevoix is also close by, just 70 km east in La Malbaie. Le Massif de Charlevoix is a ski mountain located in Petite-Rivière-Saint François, Charlevoix, Québec, CANADA, a 70 km (44 miles) drive east from Quebec City. Overlooking the St. Lawrence River, it has the highest vertical (2,527 ft) east of the Canadian Rockies. Apart from a big vertical drop and lots of snow, Le Massif de Charlevoix is unique in that the area is accessible both from the top and from the base. The skiing season usually lasts from early December to late April. There are three peaks, two of which are currently developed. Le Massif has 53 total runs, supported by a high-speed gondola and 3 detachable quads, which provides an overall lift capacity of 11,200 skiers per hour. Since 2005, Jean-Luc Brassard, the 1994 Olympic Champion in freestyle mogul skiing, became a spokesman for Le Massif. Jean-Luc is regularly spotted cordially engaging skiers at Le Massif on the snow conditions and best trails of the day. Le Massif de Charlevoix gets a lot of snow, and keeps it, as the region gets little rain for an eastern North American ski area. The natural snowpack (in the trails) can exceed eight feet at the summit during a typical winter. However, since the base is at sea level, it can lose its snow quickly during the spring thaw. The town of Baie-Saint-Paul showcases our regional culinary and artistic talent. Menus in the bistro restaurants feature local products (Produits du Terroir) and numerous art galleries frame the main street, making for an enjoyable walk.