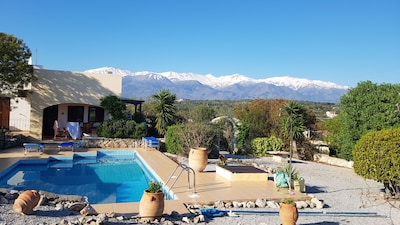 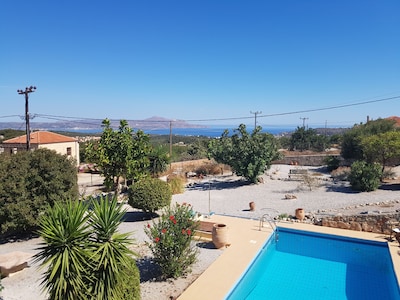 Both bedrooms have air conditioning, plus wardrobes and power points. (remember plug converters if outside EU)

Hi there, I am Claire and I am marketing our family villa on behalf of my Aunt Sarah who bought it in 2016 while appearing on Channel 4's "A Place in the Sun" . 2018 was our first year of renting so we hope you find everything you need while staying at our villa. Sarah’s Story of buying Villa Theodore April 2016 (First aired on Channel 4: 28/05/16) My story is that I visited Crete last year for the third time and when I was returning to the airport to come home in the taxi, I was looking at the mountains and felt that I couldn't entirely leave Crete behind. I live in a 1 bedroom flat in Surrey, and I was thinking about going into a little house with a garden but this last trip changed my mind. I am still in my flat, which I do love and serves me well, but my little house with a garden I decided would be in Crete.

Claire Hadley purchased this Villa in 2016

I have searched long and hard on line for the right property and in February of this year I came to Crete and looked at 15 proprieties with my sister-in-law, and there was one in Stilos which I thought was going to be the one. I wasn't intending to buy at this stage, just do a bit of a reccy and then come out in April with my sister and niece with a view to of the blue in February I heard from the television programme, "A Place in the Sun" (which I had applied for in August 2015, and thought that that ship had sailed) did a screen test and got accepted onto the show. So I still came out in April, but with "A Place in the Sun"  with my best friend, Sue, who I have known for 35 years and my sister and niece and out of the 5 properties show cased was the one in Stilos (which I had only seen from the outside so it could still be included on the show) and also Galini which was the first villa we saw, and Sue said to me "it was as if this villa was made for you".  I have to say I was torn between the 2 properties, but Galini won out and I am over the moon. Also to say we all love the name of the villa which we only found out later. During filming one of the crew, who is Greek whom I had really clicked with, lost her Dad very suddenly and I asked her if I could name the villa after her Dad, hence the name "Theodore" comes in which I understand means "Gift from God" which I feel fits beautifully with Galini. So the villa has now gained the name of Villa Theodore and I hope it will bring both myself, my family & many others much happiness and memories.

The views, the feeling of the place, the pool, the people.