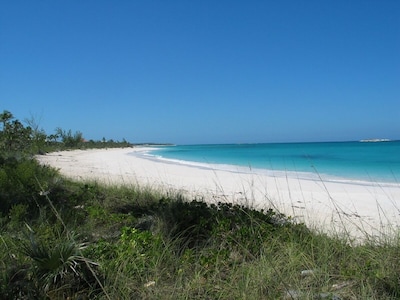 Our bedroom has air conditioning.

We are from the Chicago area and are a family of six. Tom and I grew up vacationing along the Gulf and Atlantic coast as children. We stayed on a private island in the British West Indies for two weeks after we were married and we fell in love with the natural beauty of the islands. Five years later we visited Eleuthera for the first time and feel in love with Double Bay beach, the island, and the wonderful people of Eleuthera. We bought our first property before we left!

Leigh Ann purchased this house in 1995

During our first trip we traveled the island from Harbor Island to Bannerman Town with never a thought to buy anything here. The first week we had discovered Double Bay and kept going back to 'our' beach. It was quiet, natural, seldom did we see another person on the beach, and we loved the sound of the waves crashing. The second week we found ourselves in the realtors office staring at a map of Double Bay with lots marked off for sale. By the time we left we had our first little piece of paradise! A year later we renovated the make-shift garage on the property to a house, and have been going down several times a year every year since.

Twenty-three years and 4 children later we still come to our favorite place on earth. In 1995 there were only 2 phones on all of Double Bay, no cell service, and internet was not even available on the island. If you were lucky you had a window air conditioner in the bedroom. Each year we would add something new to the house or property. In 2011 we finished a major house renovation with new windows and doors, a new kitchen, air conditioning throughout the house, and Wi-Fi. It's amazing to think about all the technology improvements in such a short time yet the island is still much the same as it was 20 years ago. The beach is as beautiful as ever, the island really does recover after a major hurricane or two, and the people of Eleuthera still welcome you like family. It's truly been a privilege having this piece of paradise, sharing it with people like you, and most importantly spending days and weeks playing in the sand.