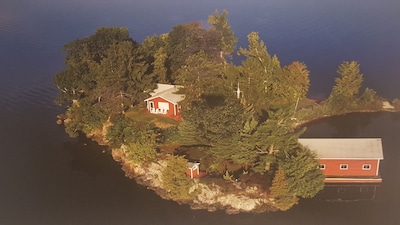 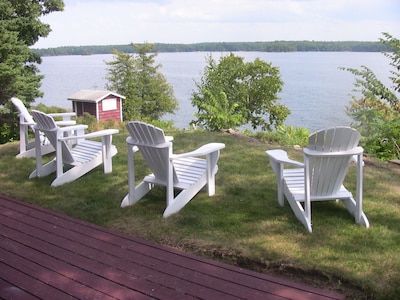 Best View of the St. Lawrence River from your own Private Island-Sept available

Enjoy Your Own Private Island With Spactacular Views. No boat? No problem!

Although the official name is O'Connor Island, it has long been known by the locals as Butternut Island, due to the presence of a grove of Butternut trees during the early part of the 20th century down near the cove. Until 1956 the only structure on the island was a "hunter's shack" with neither water nor electricity. It was purchased by Dr. and Mrs. Harry F. Pennington of Meriden, CT that year. They converted the existing structure into what is now the two bedrooms and two bathrooms, enlarged the cottage to what is now the living room and kitchen, and built the decks and a boathouse. Plumbing was installed, and the hot water heater, refrigerator, and stove were fueled by propane. Electricity was supplied for lights and small appliances by a generator located in the pump house. The cottage was wired in such a way that, when a light switch was turned on, the generator would start. In 1967, Dr. Pennington passed away, but Mrs. Pennington spent every summer here for the next 25 years. She had telephone service installed after his death for extra security. By 1987, five of the islands (including Butternut) signed up for Hydro (electricity). The generator disappeared, and electric appliances replaced the propane. Two years later the now existing boathouse replaced a much smaller one. The island was passed along to her niece and nephew (that would be me). Their families spent every summer here as their children were growing up. As the children married and had their own families, the island was visited less frequently. In 2014 the decision was made to share this unbelievable destination with others. To that end, some furniture was replaced, and WiFi and satellite TV were installed. We sincerely hope that you, our guests, enjoy the island as much as we do when we are here.

This vacation destination offers something for everyone. For those seeking privacy and relaxation, the island is yours and yours alone. The only sound you will hear is the call of the loons in the morning, and the occasional flock of geese flying by. There is definitely no need to lock the doors at night! On the other hand, there is much to do a short boat ride back to your car. For those so inclined, there is a Casino just outside Gananoque. This town, just a few kilometers away on the 1000 Islands Parkway, calls itself the "Canadian Gateway to the 1000 Islands". Enjoy shopping on King Street. Spend some time by the river where the Gananoque Boat Line Tours come and go. There is an interesting Museum there, which is free but donations are accepted. Be sure to have an ice cream cone across the street, but only order one scoop - it is all you can handle! The Gananoque Boat Line offers a 1 hour tour, a 2 hour tour (which passes by O"Connor Island), and a 5 hour tour with an unlimited stopover at Boldt Castle. For those who like live theater. the 1000 Islands Playhouse offers performances daily except Mondays. The playhouse can be reached either by car or by boat. Back at the island, you can keep the children busy all day fishing off the dock. Be sure to use hooks without barbs for easy catch and release. The fish love bologna. When the Canada geese come by, give the kids some bread to feed them in the cove. Swimming in the cove is excellent because the water is shallow and protected from the wind. In the afternoon or evening you can toast marsh mellows in the grove. There is a fire pit for that purpose. Finally, there is always the Wi-Fi and DVDs to keep them entertained. Enjoy your stay!