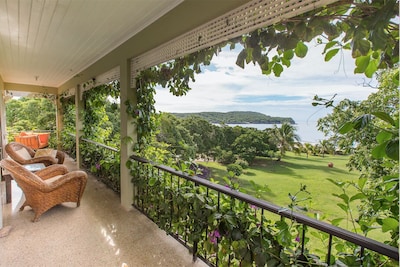 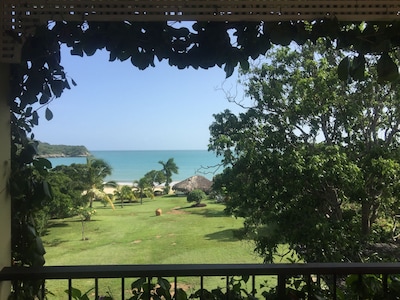 Coquina located in a serene garden on an unspoiled beach

On an unspoiled beach, this 3 bed/3bath villa is nestled within exotic garden

twin/ single (2)
Garden and sea view. Beds can be converted to a king

king
A view of the garden, beach and sea

The Blue Marlin Beach House was originally built as the weekend home and healthy retreat for the Tatham family. Now in its 4th generation the Tatham family has passed on many of the responsibilities to the younger generation. Bruce along with his aunt Sandy and reservations manager Karen hope to bring our slice of paradise to the wider world.

Tatham Family purchased this villa in 1968

The dry climate and healthy sea air was the answer to William's childhood asthma. Living in the damp, cool hills of Mandeville, William would suffer regular attacks so in an effort to find a healthier environment for their youngest child, Ted and Joan Tatham combed Jamaica's north and south coasts. When they happened upon the small, remote fishing village of Great Bay, they knew their prayers were answered. And so started the the weekly trek to Great Bay. Joan and Ted would collect the children from school on a Friday afternoon - car already packed with animals and food for the one hour trek to the coast - hopefully getting in before dark, with time to light the kerosene fridge and lamps. At weekends the children became explorers: hunting for shells, crabbing, searching for Taino artefacts, exploring nearby caves and dunes. When not exploring, sports were the focus: swimming, hiking, and playing softball and football (soccer) with the local kids. Nighttimes were spent around the table for memorable family meals, impromptu games of Blind Man's Buff, bonfires and duppy (ghost) stories on the beach. When Monday morning rolled around, everything was packed up, then back to school and work in Mandeville. Needless to say, the asthma was kept at bay, and William (and the rest of the Tatham kids) grew up to be very healthy athletic adults. In fact, Melinda, the second Tatham child went on become the Caribbean' s # 1 Junior Tennis Champion and represented Jamaica in the Federation Cup and competed at both Wimbledon and the French Open. Carrying on tradition, Melinda's children now represent Jamaica in the international Squash arena, including the highest level of squash - the Commonwealth Games.