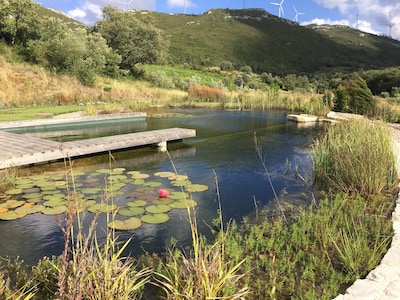 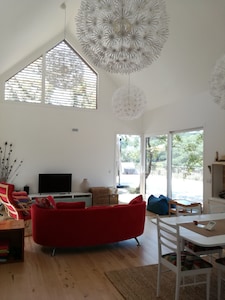 queen
Baby crib can be provided

queen
Can be changed to two single beds

The Swallow villa was just a ruin when we found it. It used to be the house of Xiné, a very big man that lived alone with a dog and a donkey. People say he was a pretty tall and sturdy man, son of a local woman called Russa. He worked as a wrestling fighter in the United States and returned to Portugal after the 1930’s crisis to live in his mother’s house. Old people still remember to fear him, a big man living alone in an isolate house. But he was a good man – people say he was friendly and loved his animals - a dog and a donkey. He used to farm this land and produce wine in his cellar. One day he drank so much that he fell in the narrow path to the village, with his face down on a puddle of rain water, and he drown. His dog ran for help, but it was too late. Half a century later we found his house and made it ours. We kept the ruin and the trees around it and hope that he is now happy with what we’ve done to his home. We built an ecological pool, so that all animals can enjoy – humans, frogs, dragonflies and all kind of birds and small mammals. We call it the swallow villa because they always come by the end of the afternoon to drink at the lake. So we hope to keep traditions, respecting nature, nurturing local fauna and flora and naturally, drinking good wine!