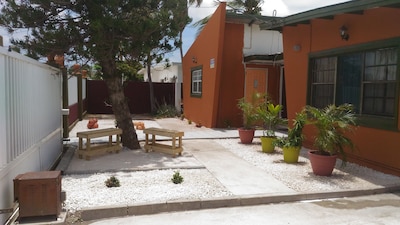 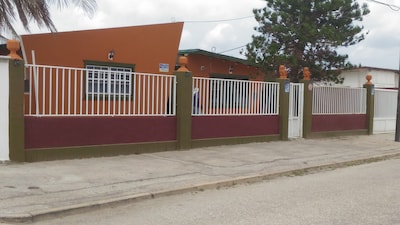 We welcome singles,couples, & family to our lovely home on sunny Aruba Island.

There are 4 bedrooms, therefore 2 people per bedroom. Totally occupancy is 8 people.

Peter and his wife Sonia Clarke are both Jamaican natives. Peter was working as a security for 10 years in Jamaica when his brother-in-law (Michael Dacosta) knew of his dedication and love of security work informed his boss in Aruba about Peter. In 1996 , Peter was invited by Michael's boss to come to Aruba and work for his company. Peter accepted te offer and worked in the security and hospitality field and developed a love for people. Peter built a career in security and hospitality after acquiring several certificates in the field and was promoted to supervisor position and has worked in a few of the large chain hotels in Aruba ; Bucuti/Tara Resort, Marriott, Hyatt, Holiday Inn, Wyndham, Divi Divi, Rio Palace, and many others. Peter worked as a contracted security and was observed by the owner of Bucuti/Tara Resort Mr. Beiman who was impressed with his work ethics and interpersonal communication skills. Mr. Beiman asked him to come and work with his hotel as a staff employee. Peter accepted the offer and worked at Bucuti/Tara Resort. Peter was recognized for several awards for guests service and was awarded by the minster of tourism in 2009 and again became a front runner up for employee of the year 2010.         Rev. Augustin Leontes ( fondly known as Rev. Leo) is the co-owner/manager along with his wife Haidy who are the familiar faces you will encounter on your visits. Rev. Leo was born on the island of Haiti with very loving parents. He followed his father's footstep and became a pastor and has traveled to many islands included Suriname, Santo Domingo, Costa Rica, Dominica Republic etc doing missionary work. He studied in Costa Rica and Dominica Republic and received his degree in theology in 1991. He was later sent to Aruba to start the first Nazarene Church. After his mission was completed he refused to leave Aruba because he fell in love with the Island and the people. He also observed that there was a need for his service. He went on to form his

Peter Clarke purchased this House in 2016

My place is close to the beach, restaurants and nightlife. You’ll love my place because of the location, the ambiance, the neighborhood, and the people. My place is good for couples, solo adventurers, business travelers, and families (with kids). There are 3 bedrooms, therefore 2 people per bedroom. Totally occupancy is 6 people. To occupy all 3 bedrooms there is a special offer of $95 for up to 4 people.