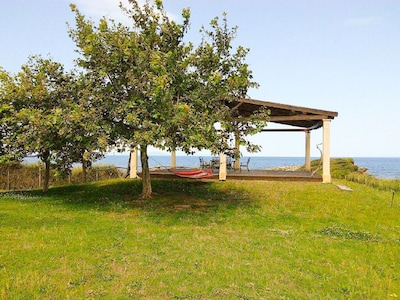 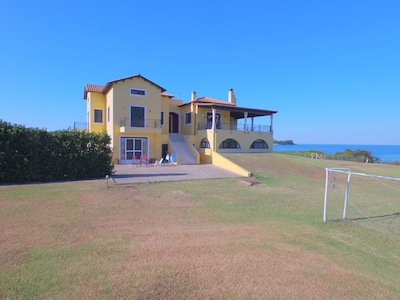 Leventochori is a village in the municipality of Pyrgos Ilias. In 2011, it had a population of 204. It is located near the Ionian Sea, at the foot of a low hill.The small and the great beach Leventochori. Both known to foreign visitors, it is characterized by dark sand and rocks that surround it, our property is just 10 meters away from the small beach of Leventochori. It is 1 km south of Skafidia, where you can visit the  Byzantine monastery of Skafidias, dedicated to the virgin Maria, Apart from the remarkable architecture, it has many treasures, such as sacred vessels, vestments, reliquaries, uniforms, weapons, photographs, coins, votive offerings and the banner of the Monastery of picture with devotion to the Virgin Mary.Τhe monastery archive and library with many manuscripts, referring to operating, music, scriptural and other issues, but also in the history of the monastery and its participation in the 1821 Greek Revolution.  4 km northeast of Katakolo major tourist destination. The large port of approaching cruise ships all year round. Shops, coffee bars and tavernas on the waterfront attract visitors to welcoming Katakolon, a birth place of John Latsis shipowner (1910-2003). Interestingly, while the area of Katakolo. Nearby are Saint Andrew, a settlement built around the picturesque cove and Pontikokastro, on a hill above the village of St. Andrew. Preserved remains of the once powerful castle, built in the Byzantine period and rebuilt by the Franks. In the same place was the citadel of Pheias, ancient city with a harbor in the bay of Saint Andrew. A little farther, in Karakohori lies the Mercouri, with a long history in the production of wine, olive oil, and currants. The wines of the famous vineyards exported from the late 19th century in Europe. On the Domaine Mercouri facilities hosted rich collection of old farm tools and machinery, which was previously used on the family farm.