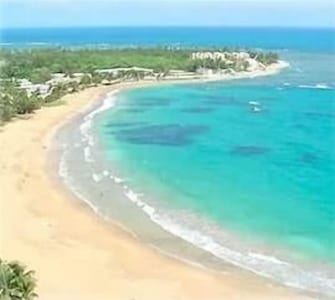 Ask a question
Member Since 2003

We are sister & brother; Joanne from Connecticut and Richard from the metropolitan Washington DC area. This condominium was our mother's and father's (US Army Col.) retirement home. We keep their home, now our home, in as fine a condition as would they, and perhaps better as they would not spend the money as we have on expensive amenities such as four TV’s one of which is a large-screen HD LCD Sony. Pic is of Richard's spouse Nancy at their waterfront farm in SOMD.

Richard Lord purchased this Apartment in 2000

As our mother's and father's (US Army Col.) retirement home, which we were fortunate to inherit, in their memory, we maintain it according to their high standards of excellence.

Our home is one of the finest & most spacious condominiums on one of the best beaches in the Caribbean, & is nearby the El Yunque Rainforest and the fantastic bio bay. It is one of only a few 3 bedroom 3 bathroom penthouse suites in all Puerto Rico. The condominium aLso has FREE 10-BIT HIGH-SPEED DIGITAL CABLE INTERNET/E-MAIL access including optional WIRELESS connectivity. It also has FREE LONG-DISTANCE TELEPHONE calling to ANYWHERE IN PUERTO RICO and ANYWHERE IN THE CONTINENTAL UNITED STATES. It also has four televisions including a 46' LCD Sony Full HD 1080P with BlueRay HD DVD player.