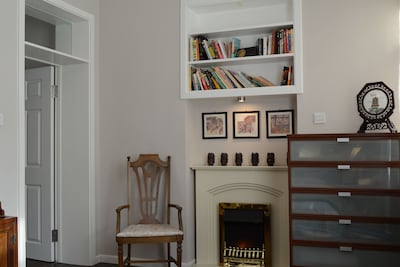 A spacious two bed room apartment in the heart of Beijing

I was born and raised in Beijing, as matter of fact, in the very apartment I am renting out. Because this apartment is situated in a western style villa, I had a lot more space and friends when I grew up compared to many kids grew up in typical Chinese courtyard. I still have fond memories of the games we used to play in the green and spacious courtyards. We used to chase each other on top of the brick walls and climb the trees. Now we have all grown up and left the villa. We only come back to visit once a while. The villa has far less kids nowadays. Eventually I left home too, after college and went to the United States for graduate school. Now I have returned to live in Beijing with my cat and two sons who keep me very happy.

Betty Wu purchased this Apartment in 2002

I was born and raised in this apartment until I went to the United State for graduate school. For many years this was the only place I called home. I have many memories of this apartment. The villa this apartment is situated is a historical villa built by the Rockefeller family as residential villa for the doctors of the Peking Union Hospital at the turn of 20th century. Although the apartment is the newest building in the villa, it is over 60 years old. It is the only 'modern' style building in the villa, which consists of some 30 houses and townhouses with gardens throughout. The villa has been declared by the Beijing Municipal Government as a historical site. The alley, or hutong, where the villa is located is also full of history. During the Ming Dynasty the hutong was called 'Shi Da Ren Hutong' after 'Master Shi', who was a powerful general at the time. He built a mansion on this very spot in 1456, which is one of the eight famous mansions in Beijing. Its current name, 'Waijiaobu', means Department of Foreign Affairs. It comes from the Qing Dynasty when the guest house of the Department of of Foreign Affairs, designed by an American Jerry Johnson, was built. It later became the site of the Department of Foreign Affairs complex during Republic of China era. It was one of the most luxurious Western-style buildings in the capital at the time. When I remodeled the apartment, I had in mind providing modern comfort as well as preserving the original architecture. I selected only top quality materials for renovation. The bathroom cabinets, some furniture, and paint for the walls are imported from United States. I kept the high ceiling, deep window cells, and door paths which were special features from the original design. In addition, some of the furnishings are from when my parents lived here. Some of them are over 70 years old.

The best feature of the apartment is its location. While it is located in the heart of Beijing it is in a quiet and secluded neighborhood. Tucked away in the back of a historical villa it is sheltered from the busy street. Although it the villa is located in the centre of one of the busiest cities in the world, there is no sense of the fast paced urgency that exists right outside its walls. The villa also features a beautiful common garden for residents to enjoy. There are many old trees that provide shade and tranquility. This is especially welcome when the greenery help soothe the heat and humidity of the Beijing summer. Another nice feature of the apartment is it's near many attractions. The famous Wangfujing shopping street and the Oriental Plaza are only a short walk away. The Tienanman Square, Forbidden City, Line 1 and Line 5 subway stations, as well as a multitude of museums, temples, and other attractions, are also nearby.