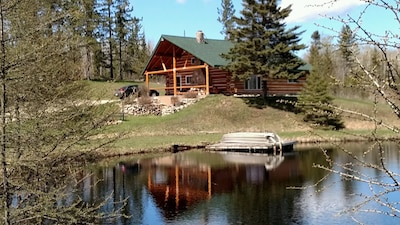 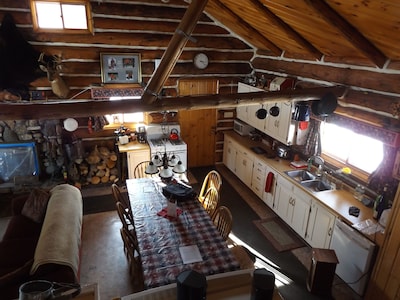 Hosted by Lynn and George Hansen

About Lynn and George Hansen

My Dad and Mom bought this land in about 1945, right after they returned from Alaska, where I and my two sibs were born. They had gone to AK as newlyweds in 1935 as colonists to settle the Matanuska Valley. It was during the Great Depression and was a great adventure for them. Like so many government plans begun in high hopes and trusting values, the project soon became entangled in government kickbacks and favoritism, negating the intentions of the colonists. They moved to Anchorage in 1940 and Dad worked as a carpenter. Then WWII began, my Mom's younger brother died in Pearl Harbor, and they began to seek ways to return state side. It took them until 1945 to accomplish their return and purchase this land which adjoined the farmland they bought. My folks raised us on that farm with all of us working the farm and the woodlots surrounding it. All the local farmers supplemented farm income with woods work. Every single farmily went out of business anyway from 1960 -1975. Growing up, we visited this pond from time to time, dreaming of a time when we'd prosper and be able to build a cabin here. We just did not manage to gain that necessary surplus income to make that happen My husband and I purchased the farm and wild land in 1965. We never farmed the land but surely enjoyed raising our family of 4 kids on the farm for 9 years. By then He purchased an insurance agency in Bark River and we moved there, sold the farm but kept about 250 acres of wild land for our "dream cabin" on the hill north of the pond. My husband, bro in law and another friend had enjoyed hunting the wild land from our home for several years. Now that the farm was gone we needed a new plan. To realize our dream cabin we sold 3 40's of wild land to the 2 the other hunting families and the dream began! Our son, Terry cut the pine trees for the walls off our land in the winter of 1975-76. It was really going to happen!

Lynn and George Hansen purchased this Cabin in 1944

Why Lynn and George Hansen chose

Everyone came out for a "Peeling Bee" over Easter vacation in 1976. Our 6 teens were a big help though there were plenty of complaints as we wrestled with the tough bark while a mixture of rain and snow pelted us. The concrete pad for the cabin was poured by a client who owed an insurance bill. He made the pad 3 feet wider and longer than the plans called for as a gift, but it caused a little crises. The log builders said the bottom logs could not be 1.5 feet inside the concrete pad or water would collect and rot the bottom log. They insisted bottom logs must fit over the edge of the concrete pad. The logs were not long enough to extend that additional 3 feet each way. The crises was solved by "stretching" the logs. The builders cut the logs where a window or door was planned, and pulling the log along a bit, added a few inches here and there. The planned long corner wings had to be more modest, but the builders were able to make our logs work. What a gift that extra area is! The men worked from a penciled sketch, not a blueprint. We ordered the 5 long logs that hold the roof, from out west as local pines do not grow that tall and slim. The rest of the material came from our wild land. Tongue and groove paneling was milled locally, stacked to dry in the cabin, and ultimately used for the ceiling and loft facing. The men worked much of next summer to erect the walls and roof. Once the walls were up and the roof installed, the professional builders left and our 3 men and my Dad, finished the building. We women ran the food station. The teens joined the crew. In addition to being gophers, go fer this and go fer that, they nailed wire mesh between the logs to secure the chinking that could not be applied until the logs dried a year. Our work crew had the roofing on and windows in before the snow. With hardly any furniture, the men hunted from the cabin that fall in spite of the wind blowing through the cracks between the logs. Refreshing

It took the next year and all three families to furnish the cabin. My Dad built the large dining table that we still use, and the solid wood doors. They have stood the test of time. We used old drapes to form the "walls" of the bedrooms downstairs. The loft was open, with a railing on the edge. We found a combination wood and gas range and old gas refrigerator. Propane lights were installed in each "room". Water for washing was dipped from the creek and we hauled drinking water. So we coped and enjoyed the cabin for the next 22 years. Many important things have not changed since then. In the spring the frog chorus warms up at dusk and reaches a climax when it gets dark. The sound of water rushing over the dam is deeply relaxing. At night the stars are so vivid they inspire awe. Visiting and cooking by campfires both in the cabin and outside, has built a sense of connection within the clan. Our many hours of swimming and water play have stored a treasure of memories. We hold most family showers, graduation parties, and birthday celebrations at the lodge. In 2014 we even hosted our granddaughter's wedding and reception there. When out of town company comes, this is where we entertain. Though it has less square feet than our home, a large group is more comfortable here. A lot has changed since then. In 2000 my family decided to improve the cabin. The kids were grown and able to help with expenses. We had walls built, a well drilled, and purchased a propane generator for intermittent electricity. The down stairs bathroom was installed. It became much more comfortable and the cabin became Serenity Lodge. Gradually the loft cabinetry and half bath improved the loft too. In 2013 my son ran the electric lines to the Lodge. New appliances and lights were added. The chandelier my Dad had made for our home came home to the Lodge. As I write we plan to gather at the Lodge again.. Come, connect, be refreshed. Make your memories. Leave renewed.