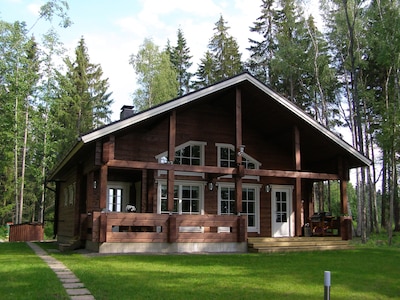 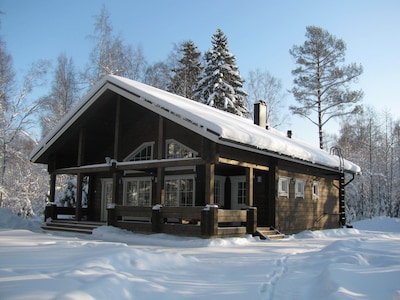 Cottages near Helsinki - Easy To Reach Location In Southern Finland.

We are Erja and Arto Laine, farmers from the municipality of Hattula which is located in the middle of south Finland. We have three adult children. Our own home, the main farm house of the estate, is located 2 km from the cottages. We are a small family company and we are dedicated to offer you friendly and unique service. We are looking forward to having you as our guest in our cottages as well as in Finland.

Arto’s family have had this farm since the late 1800's, and we have continued farming since 1994. The cottage called Kaisla (Bulrush) was completed in the spring of 2007, and another one, called Lumme (Waterlily), by the end of the same year. The versatile culture environment in the Vanajavesi valley was formed during centuries. Due to its fertile surroundings, the Vanajavesi waterway has provided a favourable place for inhabitation. The first farmers lived in this area as early as in the Iron Age. There has been a prosperous manor house culture with fine parks since the Middle Ages. The oldest cottages by lake Vanajavesi were built in the 1800’s.

Ridges, lakes, fields, forests and marshes are typical of the landscape. As the phrase goes; Finland is the land of a thousands lakes. The beautiful Lake Vanajavesi is 31st largest lake. Kriipi’s island and the surrounding water area included in the Finnish Natura 2000 network of nature protection areas. Here you can also observe a variety of birds, such as ducks, terns, great crested grebes and swans. Deer, elks and foxes are common in this area. At dusk, there are tailed deer moving near the cottages. After you have been in an original wood stove sauna and swum in the lake or rolled in the snow, you’ll understand why Finns love the sauna.