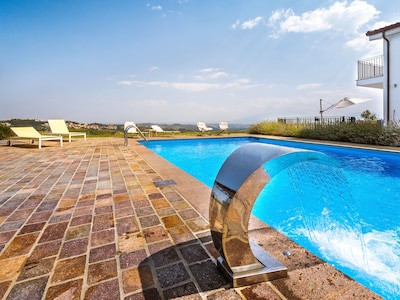 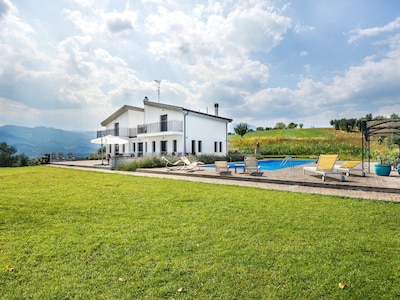 Stephen and Marion also have a small farm with an olive grove in the nearby area of San Giorgio. Some 500 trees on about 25 acres that produces about 600 litres of olive oil which they sell to friends, family and colleagues in the UK.

Marion Hughes purchased this villa in 2014

Stephen grew up in Rome for part of his childhood (and speaks fluent Italian) and has strong memories of a mountain retreat the family rented in the Abruzzo mountains, not so far from Rome. Taking a sabbatical six years ago he went to the Abruzzo to re-kindle those childhood memories and fell in love with a hillside with stunning views of Penne, a delightful medieval town, and the surrounding mountains, with glimpses of the sea in the distance. Casa del Colle now sits on that hill.

Nestled between the sea and the Apennine mountains, Penne offers something for everyone. Sea and beaches are 40 minutes by car in one direction and mountains a similar distance in the other - but it is the beauty and seclusion of the mountains that stands out. Rising up sharply just behind the house to nearly 3000 metres is the Gran Saso, the highest peak in the Apennines. Glacier in parts with ski slopes for the Winter. In the summer you can visit the Campo Imperatore, 80 sq km of high plains used as the setting for more than 20 films including spaghetti westerns. In the middle of this plain sits a butchers that sells meat from the mountain herds, the speciality being arrosticini, small lamb kebab which can be barbecued there on one of the communal BBQs.