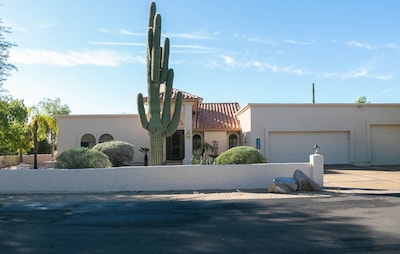 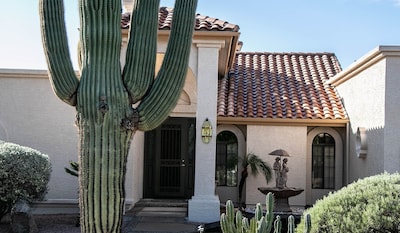 The current owner bought the property in 1997, and made it mostly their year-round home over the majority of those years. But while they enjoyed this property very much for approximately 20 years, they did not have horses. Thus, the unusual set-up on the other side of living space for people, entering through a room that is the laundry area, then into a bathroom & lastly a bed area. Those last 2 were converted to what is there now in more modern times with the idea that they could be used in its current fashion, or as a quick in or out for those with a recreational vehicle when one gets in late and doesn't want to go up and set up at the main house. This way, one would have a quick & easy place to sleep after a late arrival, or to be ready for an early departure.

Rosey Reich purchased this house in 1997

More on the House and Neighborhood - Then & Now: This residence was built in 1987 as one of the first homes in this all-custom subdivision, where homes currently sell from as little as $550,000 to 1.3 million dollars, and all are situated on 1 acre parcels ranging from the 30+ year originals to the brand new, built in 2019 and 2020. A lot of the older ones have been substantially updated in recent times. While many of the neighbors mostly keep to themselves, the ones you may encounter couldn't be nicer when treated in-kind. Do know that the City of Scottsdale has a noise ordinance that is strictly enforced and thus it is typically wise to keep it to a low roar, especially after 9 p.m. The main house is approximately 3,300 square feet with another 300 square feet or so at the guest house & studio. It is our understanding the family who built the property (and resided here for approximately the first 10 years) were very much into the equine lifestyle. They not only had a great interest in horses, but they were also in the horse business. We have been told the house was often times used to host equestrian workshops and conduct entertaining around facilitating horse sales. Note the design of the two metal-gated entrances; the one on the North & the one on the East; a horse trailer can easily drive in one and out the other without having to turn around. The same is true with the taller of the two garages and the paved driveways - one can guide a truck & horse trailer large vehicles in and out with ease.

Of course, those tall garages at the main house can be used not only to park horse trailers, but also for what the current owner did for years - have a recreational vehicle or just use it with regular cars, a golf cart, etc. As to the space we now refer to as a guest house & studio, it was originally built out for people on the northwest side only and was referred to as the "jockey's quarters". The rest of the space there was for horses - a tack room, stables, and the corral, most of which survives to this day. It could still be used as such, but much of it has not been maintained. One of the 3 horse stalls is now used as storage for the current owners family items.