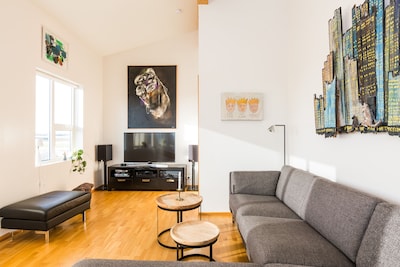 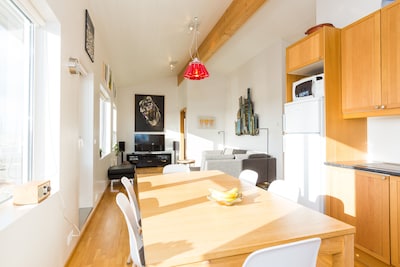 All beds are made up and towel is incl.

Jóhanna and Stefán are the owners of Guesthouse Kvöldstjarnan. We enjoy our new lifestyle, living in a small, peaceful fishing village, only 60 km away from Reykjavík. We love to travel and we also like to meet people from all over the world. We moved from Reykjavík where we have lived most of our life, apart from few years Jóhanna lived in Denmark and Stefán in England, Germany and Denmark.

Stokkseyri is a quiet and beautiful ex-fishing village by the south coast of Iceland with only 535 inhabitants. The village, which is part of Árborg municipality, is a little more than 60 km away from Reykjavik (50 minutes’ drive) and ideally situated for day trips to all the major places of natural beauty in the Southern Region such as Þingvellir, Gullfoss, Geysir, and Seljalandsfoss - a must see for everyone visiting Iceland. Stokkseyri is known for its diverse birdlife and magnificent and beautiful shore typically characterised by alternating rocks and rapids, surrounded by back waters with thick shell sand bottom creating the habitat of various shellfish, conchs and crustacean. Arts and culture thrive and workshops, studios, galleries and museums are found in many places, besides local handicrafts. For example, the Hunting Museum displays stuffed animals from all over the world, original and interesting stories of ghosts are being told at the Ghost Centre, and the Icelandic Wonders Museum, dedicated to Elves, Trolls and the Northern Lights, gives a glimpse of how elves and the hidden people lived. Þuríðarbúð - the winter fishing hut of Þuríður Einarsdóttir (b. 1777, d. 1863), one of Iceland’s greatest fishing captains, or foremen, and notably a woman - has been reconstructed and turned into a museum. It represents well the housing conditions of men who went to sea to fish in previous ages. East of Stokkseyri is Knarrarósviti, the first reinforced concrete lighthouse in Iceland (built between 1938 and 1939) and the tallest building in the Southern Region. Close to the lighthouse is an old Creamery by Baugsstaðir farm, a local museum exhibiting outdated dairying equipment. The much celebrated lobster restaurant Fjöruborðið (e. the Foreshore) is located in Stokkseyri, almost a stone’s throw away from the flat and a small store (selling bread, cheese, butter etc.) is also within walking distance. Various services are available in Selfoss town, 13 km away (10 m