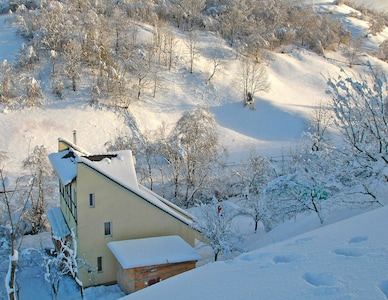 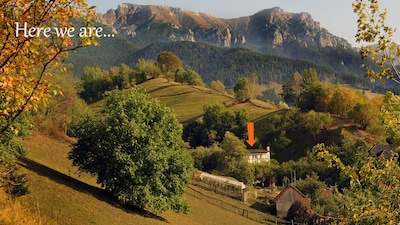 THE GUARDIAN:'ONE OF EUROPE'S TWENTY MOST FANTASTIC VACATION VILLAS'. SEE WHY!

3 Bedrooms each w. own bathroom, sleeps 10, Jaccuzi in the attic, 4 Bathrooms

We have chosen our favorite: -beddings - pure, soft cotton, -pillows - pure down and -ideal mattresses (medium-hard, very comfortable and really good 'for all backs tested so far'). - Radio -CD - MP player next to EACH double bed - All three bedrooms have their en suite bathroom. There is a double sofa in the living room. On top of the both upper bedrooms there is a space where two single foldable beds can be placed (a total of 4 more people can sleep in these two spaces). Alternatively, these single beds can be placed in the bedrooms themselves. What is for many of us a self-understood feature of a normal bedroom seems to be rare in this part of the world: the option to block the light, to keep the bedroom dark when you wish (need) to sleep in. In our house you will have that.

I left Romania as a teenager. I could not forget Bran, in which I spent my childhood's most wonderful vacations. I thought that Bran will eventually become part of my past, as so many other people and places did. A few years ago, after traveling the world (also through my work as a travel photographer, working for the National Geographic magazine among others), an overwhelming nostalgia, forced me to admit that I would never forgive myself if I will not somewhat recreate my childhood’s nest in this fairy place. It also became clear to me that with all the respect to Europe’s super-well-established travel destinations, there is nothing as intensively beautiful as this place. So I built this house. One hundred steps away from the house my parents built theirs, which we lost, once we left Communist Romania. Today I am so happy to spend not only my vacations, but those of my son (born outside of Romania), as well as that of my parents, so many years after they offered me the same treat.

Dinu purchased this Villa in 2006

1) We think that (also) the house and for sure the area, are Heaven. 2) So did 'The Guardian'. 3) So did most of those well-travelled Western travelers who greatly enjoyed our house and its surroundings, people who in most cases have never experienced this part of the world before. It made us quite glad and proud to find out that some of them only decided to 'check out Romania' once they saw our offer.

We did not purchase this house. We built it from scratch. Building it along the same mountain stream, below the same mountain peaks as the house I spent my childhood's best part in, was essential. I did not create it as a quickly improvised business, but as my and my family's 'sole recharging station'. And it does just that and so well! Each and every choice (idea / object) in this house was the result of a long process, sometimes brought from far away, with great efforts. For my family, the house and the breathtaking views in its surroundings are THE reason to return again and again, a few times a year, but beyond the old / eternal attractions, there are more and more new sites and activities in the area making (y)our vacations into an unique and ideal combination of nature and history + 21st century treats.