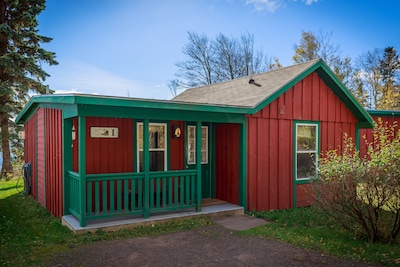 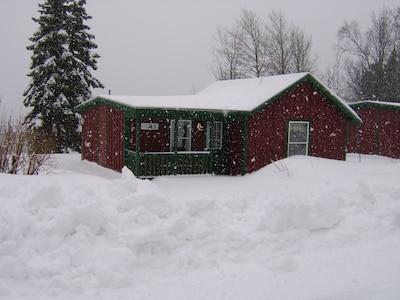 Croftville Road Cottages #1. On the Shore of Lake Superior. Cozy and Romantic.

Four Season Cottage on Superior. Full kitchen. Sleeps up to 6 (2 on the futon).

About Teresa and Mike Chmelik

Teresa and Mike Chmelik are the owners and operators of Croftville Road Cottages. They live in the owners quarters of their inn. In an era when most mom and pop resorts along Lake Superior are being closed, Teresa and Mike have built Croftville Road Cottages from a former resort property that had been unoccupied for 10 years. At the same time they have raised their children along Lake Superior in a small town setting and kept outside employment to support themselves while building their business. 2018 marks the first year that Croftville Road Cottages has finally fully supported them. They have done as much of the renovations, repairs, and construction as they can themselves. When that has not sufficed, Teresa and Mike have relied on the help of family, friends, and skilled local craftsmen.

Teresa and Mike Chmelik purchased this Cottage in 2003

Teresa and Mike long dreamed of having a resort on Lake Superior. Grand Marais had always been a special place for them. For Teresa, her parents had met as students at the Grand Marais Art Colony in the early 1950's. For Mike, Grand Marais had always been the gateway to the Boundary Waters Canoe Area. The Chmeliks with the help of their good friends purchased their dream property in July 2003. It was a former resort property unoccupied for 10 years. That summer and fall was spent making the house habitable while living in a borrowed camper trailer until Halloween. The next 3 years were used to clean up the property and extensively renovate the cottages. Croftville Road Cottages opened for business in 2007. In 2011 the Chmeliks decided to reconstruct the house into the main inn for the resort providing living quarters, an office, and 5 vacation suites. In June they bought a travel trailer to live in and serve as an office during the expansion. With a variance granted, the Chmeliks secured financing in June 2013 after the deconstruction and demolition of the old house had already begun. Construction for the inn began in August. The Chmeliks moved into the partially completed inn in October 2016. The first 2 vacation suites in the inn opened in June 2017 and remaining 3 in July 2018.

We offer an experience reminiscent of days past when small mom and pop resorts were found all along the North Shore. However, our cozy cottages and luxurious suites are among the finest vacation rentals along Lake Superior. The inviting and romantic cottages and suites are impeccably clean and meticulously maintained. Nestled on 540ft of rocky shoreline, we are conveniently located just 3 miles from downtown Grand Marais on the lakeside of scenic Croftville Road known as the "walking road".