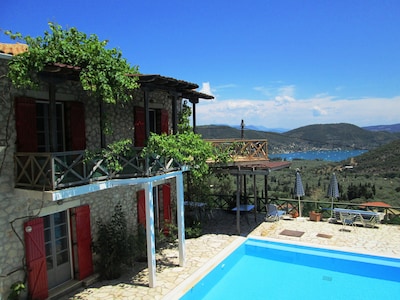 Jenny is a Clinical Psychologist and John is a young person's hip surgeon. We met in 1992 and currently live in the midlands, visiting our Greek escape at every opportunity!

Villa Helidona purchased this Villa in 2002

Our first introduction to Greece was Jenny in the 60's during the Junta regime- the Greeks were very generous to the apparently destitute students, two of whom ended up giving blood in Athens to raise money! Our first tour of the islands was in 1996 when we took the whole family on an Odysseus flotilla from Corfu to Ithaca/Kefalonia and back to Preveza. Further tours followed. We took our third tour by yacht around the islands in Summer 2001 and somewhere in Nidri, looking up at the stars, we elbowed each other and decided to see if we could buy or build a house on the island. The houses for sale seemed rather expensive (we only later discovered that you only were expected to offer 55-60% of the asking price!) We then discovered a German called Jurgen Kuster (he had married a local lass and the land was hers) who had seven plots, in between zig-zag roads, available for building just above the charming village of Paleokatouna, with its famous Dimitri's taverna. We came to Lefkas in the first weeks of 2002 to look at the site and to sign the deal. The site was astounding (although thorny and inaccessible) and the view enthralling. We decided to choose a solid stone house with modern amenities, building permission was obtained, but then we discovered that the planned house was the wrong way around on the site! This took a month or two to sort out! The stone was cut from the north side of the Melissa gorge, near Tsoukalades in the north of Lefkas. We moved in for the first time in April 2004. Since then we have constantly refined and improved the house over the years. The most dramatic development was in 2012- 2013 when we had a beautiful new internal marble staircase made and converted the house from two three-bedroom flats into a five bedroom house. We also extended the outside spaces and built a garage , a car port, a second large pergola and a large viewing balcony attached to the master bedroom.

Spacious Comfortable and relaxing Quiet Well-equipped Stunning sea and mountain views Walking distance to the village taverna 5 minute car journey to the beach and resort of Nidri. Large kitchen for cooking and entertaining