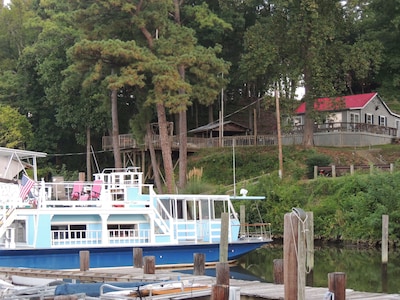 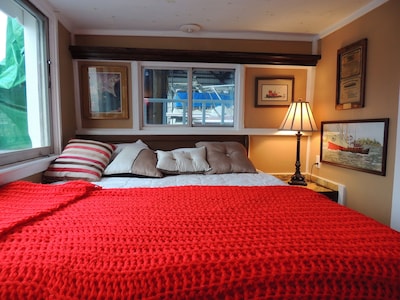 A Warm and Cozy 50' Houseboat in gated, quaint and peaceful marina near the city

The Master's quarters has an eleven inch Sleep Innovations memory foam mattress, high quality bed linens and a seven foot window with a view of the river and the island across the channel. It is carpeted, has heat and air conditioning a small closet, plenty of drawer space, and a bedside night table with a soft glow reading lamp. It is also equipped with a separate 12 volt lighting system. The room is decorated with personal pictures and art from my private maritime collection.

I am a retired tugboat company owner/captain who cannot get the James River out of my system, I began going on tugs with my dad when I was just four years old and that was more than 7 decades ago. Throughout those years I was blessed to meet and befriend people from many seafaring nations and from all walks of life. Sometimes I wondered how some ships ever made it across oceans to come and load cargoes. The Captain's entire family would be living aboard with chickens and goats and dogs and dried fish hanging from many places on the outer decks. At other times the officers would be in full dress and sail spotless ships into the harbor. Many of my personal stories can be found in Bohemian Skipper (Amazon), it is a collection of river stories and yet to be published, Chosen River l and ll. It is a book told from the heart by men who seldom saw their loved ones, or who had escaped their homelands and probable death for a better life, as was the case of a wonderful skipper who told of the atrocities committed by Mao Tse-Tung after the end of WWII. During those years, I raised a family, built some homes/restaurants, earned a degree from Richard Bland College of the College of William and Mary, with continued ed at Virginia Commonwealth University and University of North Florida. In 1987, I was appointed by Governor Gerald Balliles as the Maritime Commander for Central Virginia in the Virginia State Guard with the rank of Lt Colonel. I am currently married to my lovely wife, Ruth Christiane Rawlings, a Rocky Mountain girl turned Queen of the James who at age 60 received a Master of Teaching degree. Ruth has enjoyed a colorful background that spans from raising kids as a single mom to skydiving with the Golden Knights, to acting as the lead in many plays and musicals such as South Pacific, Zorba, Scrooge, Wait Until Dark, she also starred in Brigadoon and Pajama Game. And later, she sang alto with the Richmond Symphony Chorus for seven years.-

Virginia has its share of famous places to visit and no one can dispute this fact. For example we all know of Monticello, Mount Vernon, Civil War sites such as Manassas/Bull Run, City Point, and the Battle of the Crater. But then there is this little known place to lay your head that virtually no one has heard about, and it is in many ways far more historical than any other of these locations because of the varied influences it has had on our country's development. And that place is the area where the GiaMaria and the Cookie B rest in Virginia's oldest marina. Consider this; on our shore and within a mile surrounding our marina Chief Powhatan ruled over the village of Arrohateck, and Pocahontas and John Rolfe's farm abutted the marina where they would grow the Varina tobacco that would save the colony from being abandoned. Captain John Smith wrote that he filled his ships with the best "sweetest" water from our spring, and Henricus became the second English settlement in America after Jamestown (open to the public as a restored "cittie"). Here Benedict Arnold would destroy our Colonial fleet of ships during the American Revolution and troops would pass by here on their way to fight in the War of 1812. Three Medals of Honor would be awarded here because of bravery during the Battle of New Market Heights/Chaffin's Farm. A major prisoner exchange took place just around the bend at Akien's farm at the end of the Civil War (my great grandfather Emmitt Brown was one of them). And sadly many slaves passed by our shores on the way upstream to Richmond where they would be sold. But thankfully those who would free them like Abraham Lincoln floated close behind. Men like Washington, Lafayette, John Marshall, Peter Jefferson (he lived here) and so many more passed within feet of our little marina. Yet we are only a stone's throw away from Richmond, Petersburg, Charlottesville Jamestown, Williamsburg, Yorktown or Fredericksburg. Va. Beach or Washington, DC 2 hours by car.

What makes this house boat unique

Each of my guests seems to have found something that they liked about the GiaMaria or the Cookie B. For some it has been the comfort of the memory foamed mattress and high quality linens, for others it is the upper sun and viewing deck, still others like the large ceramic shower, some, the shaded forward deck or the large living quarters for lounging or reading. My guests books are filled with interesting things that some guests have shared with me. Read below an October note from Al and Mary Ann from Pittsburg. Dear Captain Ron, "This has been a very memorable experience. We have traveled extensively throughout the world and this overnight stay ranks as one of our most unique. Would love to have spent more time hearing about your life. My only regret is that our children and grandchildren were not here with us. They would have loved it." Warmest regards, Al and Mary Ann