All Pine Inn - Large 4bd/2ba - just steps to the village 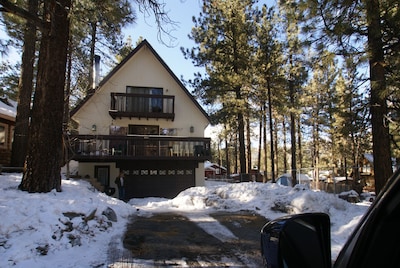 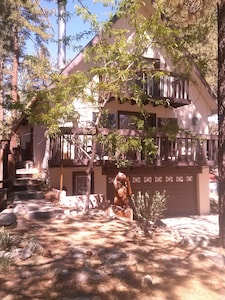 Taking the road-less-traveled (while returning from a high desert business meeting) meant encountering a sign stating that Wrightwood was seven miles – that-away. Childhood memories made turning my back on civilization a no-brainer. One slowly rising bend led to another, as desert chaparral became turned to scrub oaks, before giving way to age old towering pines and majestic oaks. The small town charm of kids walking to school along streets with no lights was irresistible. Nestled amongst the surrounding National Forest, yet minutes to the ski resort, were homes of various distinctive character, built over the last 100 years. Being in a National Forest means houses get rebuilt, not malls constructed. What began as a great place to grow apples, is now the gateway to four seasons of sublime activities. And Wrightwood is so accessible, just an hour to the Big A. So funds planned for investment into senior condos, instead became a labor of love - in owning and sharing the mountains as a getaway to renew the core of you. So what was once a newlywed investment, three kids later, has become a lifetime of family memories - spread across multiple homes. There is so much to see and do that’s different at elevation. People unplug, literally, and thereby recharge themselves. But we can’t be here every week. So we take pride in maintaining and upgrading each home, to make better memories for our guests.