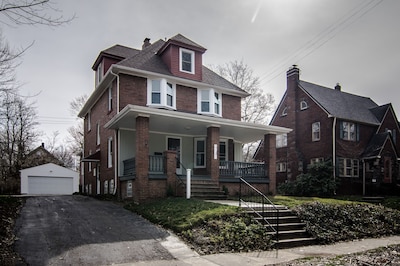 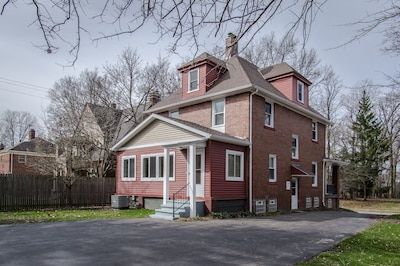 5 bedrooms/2.5 baths with all the modern amenities.

king
Enjoy some solitude and privacy in our 3rd floor mstr suite.

We offer 5 queen beds . As well as the new sleeper sofa down stairs in the living room.

Born and raised in Cleveland.....I stayed up here in Cleveland Hts right after graduating John Carroll University....and after a short stint in the corporate world I made the plunge into the world of remodeling and realestate. My wife and I are foodies and love the local fare as well as the close proximity to the downtown restaraunts.

frank kuhar purchased this Farmhouse in 2015

This particular property was abandoned and in dire need of some serious TLC. As luck would have it, the "bones" and basic structure were sound and worth saving. Cleveland Hts is one of the original "inner ring" suburbs and as such they have some of the most interesting architecture and homes you'll find in the area. I'm in the process of researching the homes history but I was attracted to the large front porch with classic Clev Hts spindles and the farm house look. Over the past 8 months we've completely revamped the mechanicals, gutted bathrooms and the kitchen and even vaulted the sunroom ceiling.

Some of the major benefits to guest would be all the modern amenities: updated electrical with grounded outlets throughout (This is one of the few homes with ALL new wiring ) The furnace and ac are new and energy efficient and all the windows have all been replaced and are easy to operate. The entire house has been modernized with all the creature comforts you could want.