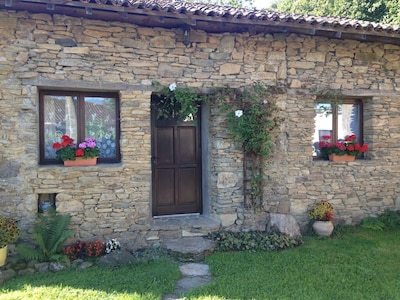 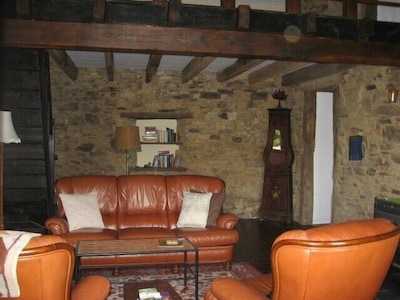 Spacious, yet Cozy, Stone Cottage in Charming Hamlet: in Heart of Natural Park

Ground floor master bedroom with queen-size bed (160cm). Exposed beams and stonework in all bedrooms & mezzanine. Please note: the stairs are quite steep, so we do not recommend the upstairs bedroom for very young children.

Jane & Peter split their time between France and the coast of Maine (north-eastern USA). In La Boissonnie, we live in the old 'épicerie' (grocer's shop) and are enjoying converting an adjoining barn into extended living space. Jane is a French teacher and has lived in Paris and Belgium, in addition to (now) Limousin. Peter, who grew up in Somerset, England, is an environmental scientist (& part-time musician). Between the two of us, we are fluent in French & Spanish (also English...). We also owned / operated a hotel for a number of years, which on the whole was fun.

Jane & Peter purchased this Cottage in 2012

After vacationing over the years in different parts of France, we settled on the Haute Vienne because of its peaceful, verdant, scenery. Also, La Boissonnie is a very convenient centre for visiting a wonderful array of other locations, not only in Limousin, but also over the border in Dordogne.

La Boissonnie is the typical Limousin hamlet that we were searching for - with winding lanes, plenty of peace and characterful French neighbours. There are some wonderful walks, readily accessible right from the cottage, and plenty of interesting sites within easy reach. And, while sitting in back garden enjoying a glass of wine of an evening, the stars are brighter here than anywhere else we have lived (which says quite a lot!).