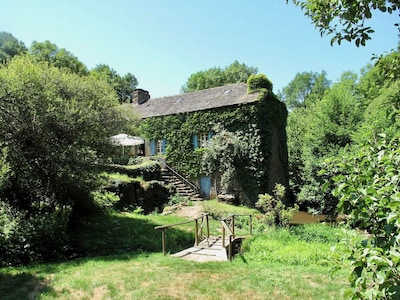 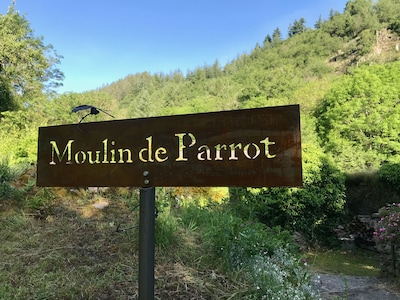 double
Spacious and sunny with french windows and ensuite shower

I am a literary translator from French of books on the arts, architecture, gardens and history, with a special penchant for the French Resistance. I first fell in love with this part of France in 1975, when I was a student in Toulouse. Gavin is a technical director in theatre who has a long history of restoring classic cars (Citroën DSs a speciality) and historic houses. When we first saw the mill in 1989 it was love at first sight. Long abandoned and dilapidated though it was, it had clearly been an important and well-loved building, and the site was simply magical. In the early months we lived there without electricity or running water, while slowly re-roofing the house, installing services (with the help of the very supportive local mayor, who was related to the family of the last millers there) and turning it into a family home. Aided by stalwart friends and volunteers, we did all the work ourselves. Determined to respect the authentic and historic character of the building and mill workings, we sought out the few remaining survivors of the last generation of millers from other local mills, and consulted regional experts on mill history and technology. We met some amazing characters and it was all absolutely fascinating. Outside, we slowly began to clear decades of undergrowth to reveal the weir, millpond, stream and overflow waterfalls. Meanwhile two babies had arrived, and in due course our children attended the local village school. By then we felt we were really accepted as part of the local community, a huge privilege.

The thirty years or so that we have devoted to the mill are just the blink of an eye in its 700-year history. A descendant of the Imbert family of millers, whose name is carved above the door, has traced its story back to 1292, when it was established by the Duke of Rodez (copies of the fascinating documents M. Imbert has unearthed can be seen at the mill). For centuries the mill played a pivotal role in the local community, first as the property of the local lord and then – until the Revolution – as a fiefdom of the priory at Ambialet on the Tarn, in its spectacular position that can still be visited today. Local people would bring grain and dried chestnuts to be milled into flour, fresh chestnuts to be crushed for oil, apples to be crushed for cider, and hessian and linen to be fulled and washed. While all this went on, clients would gather in the main room of the mill to chat by the fire, or fish for trout which the miller's wife would cook over the open fire, keeping other dishes warm in a pot-warmer beside the front door. Water was drawn from the spring beside the present site of the swimming pool, a source that was so pure it reputedly attracted people from miles around. Cider doubtless flowed freely, and all the latest gossip would be shared in the local patois. The miller also kept pigs and hens in the building that now houses the barbecue, and cows in a barn that was later demolished, leaving one of its doors as our dining table. When we first went to see the mill, our first impression of the big communal room was of the scent of woodsmoke and the feeling of conviviality that seemed to have soaked into the walls. Thirty years later, 2019 was a landmark year for the mill, as we managed to secure a departmental decree recognising the historic nature of the site and granting it protection in perpetuity.