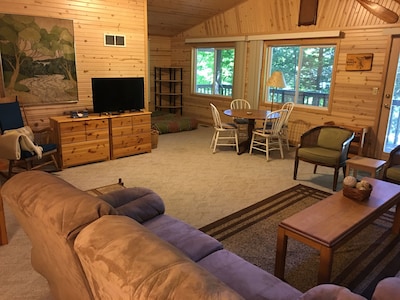 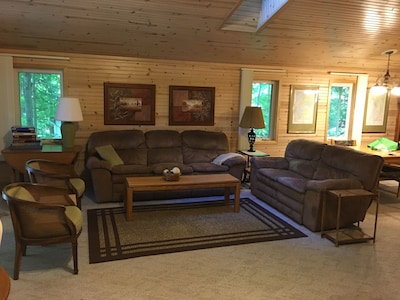 This cottage was built about 1910 as part of a resort called “Griswolda” since it belonged to the Griswold family of Chicago. Resort cottages were located at the top of the hills here, and the dining hall, store, tennis courts and hotel were down at the waterfront. Most of the people who vacationed at the resort were from the Chicago area. Dick and Alison Puffer own this cottage now, and the one next door named Hilltop. Alison’s grandparents bought both cottages in 1914 when the Griswolda Resort operation shut down. There was no electricity, running water or bathrooms, instead relying on hand-operated water pumps and outhouses. Wren’s Nest had a screened porch in the area which is now the bedroom. An indoor bathroom was added in the 1950’s, followed by telephones and electricity. A major remodeling was done in the 1990’s.