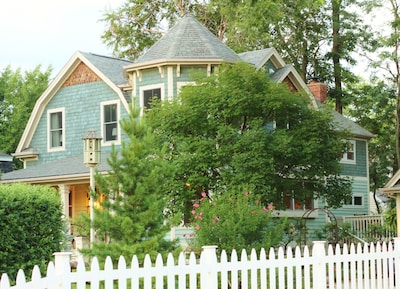 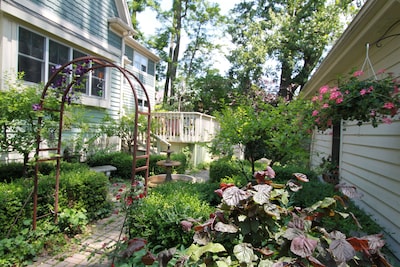 One of our other passions is music. I was involved with the Guardsmen Drum and Bugle Corps for 26 years, as a marching member for 10 years and 16 as a choreographer and director. My whole family was involved in one way or another. My sister Celeste and Paul were members while sisters Claudia and Regina, followed and helped with management. My father was very active as director and my mother sewed flags and followed us every where. In 2015 I had the honor to be inducted in to the Drum Corps International Hall of Fame. My son has followed in music and was a member of the Green Thunder Percussion Ensemble and has been taking piano lessons for 15 years. I am currently president of Ray's Hvac, a heating and air conditioning company that my father Ray started in 1956. My mother and brother Paul work for the company as well. My son and I have 3 dogs: Minnie Pearl, a Jack Russell/Pomeranian, Magnolia, a Fox Terrier, and Mr. Conrad, a Border Collie. Both Minnie Pearl and Mr. Conrad were rescued from visits to Ireland. We are involved along with my sister Claudia with Young at Hearts, a senior pet rescue and adoption organization. My son also volunteers at the Animal Care League of Oak Park. My son and I are parishioners at St. John the Baptist in Winfield, and I am also a member of the Human Rights Campaign. We starting doing vacation rentals in 2001 with our thatched cottage in County Kerry, Ireland. Cottage Mary Rose is named after my mother. She went with me on my first trip there and has been back many times. - William Harty, The Davis House,

William purchased this house in 1999

Our last old treasure is the Davis House in Glen Ellyn, Il. It is a 1892 historical land mark. I fell in love with Glen Ellyn as a young man working for the family business. I would come down Main Street to make pick ups from some of our vendors. When I first saw the Davis House, I knew this home was a diamond in the rough. The house built in 1892 originally owned all of the surrounding land...consisting of around 8 acres. Originally built by a German family, it is considered a Gambrel style home. We found German Chicago newspapers in a wall in the basement. The Davis family from England were the 3rd owners. In 1929 they began to sell off the land and put a short road in behind the existing home. They built 3 Sears bungalows for their children and named their new street Davis Terrace. The house originally faced Western Ave. so when we moved here there was no real front and the old garage was in what was now the front yard. The original clapboard siding had been covered over with aluminum siding. We had all of this removed and duplicated the original cedar. We added the front porch an turret to give this wonderful landmark home the grand look that it deserved. Winner of renovation of the year 2002. Granted Landmark the same year! USA Today Travel named Glen Ellyn as one of America's Most Picturesque Small Towns as their selection for the state of Illinois. It is a charming, picturesque welcoming community that offers a big city amenities with a small town feel. What makes Glen Ellyn picturesque? Its historic downtown filled with locally-owned shops, unique restaurants, a restored 1920's movie theater and seasonal events are just some of the many attributes that draw visitors to our award-winning community. Glen Ellyn has a quality of life that is unique for a Village including its cultural, entertainment and recreation opportunities unique to the area.

The house is nestled in a great historical neighborhood off of a quiet street on a cul de sac. Walking distance to parks, town and the train which will get you to the heart of Chicago in under 30 minutes. Woodfield Mall, one of the largest in the states is a 20 minute drive away. The house is embracing and has the spa like feel with the whirlpool tub and rain shower. Beautiful private gardens and gracious indoor and outdoor entertaining areas.