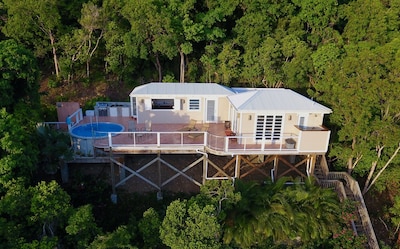 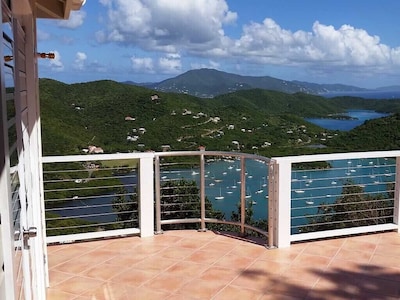 Ask a question
Member Since 2015
Jim Pfeiffer is a Premier Host·The owner or manager of this property consistently provides great experiences for their guests.

We live in Southern New Hampshire and enjoy escaping the Winter.

Jim Pfeiffer purchased this cottage in 2015

We have vacationed on the island of St. John for over 25 consecutive years. We started as campers at the Cinnamon Bay Campground, graduated to a decade of bareboat chartering in the USVI and BVI, and then began renting vacation homes in Coral Bay. At first, we visited once a year, then twice a year, then on occasion, three times a year. It was pretty clear that we liked St. John and Coral Bay. We purchased the property in 2002, finalized building plans in 2013 and began construction in 2014. The project was completed in January of 2015. Skyloft is built to current construction codes, has an occupancy permit and has passed electrical and fire inspections. Skyloft, named for its small footprint and spectacular VIP view of all the 'action' in Coral Bay, is our vision of simple, upscale, relaxing, outdoor tropical living. We were visited by hurricanes Irma and Maria in 2017. Skyloft was damaged, but the damage was repairable. Except for the entry stairs, which were destroyed, no critical infrastructure was damaged. The roof and deck remained intact. We flew down to St. John in November 2017, and stayed, affecting repairs through the beginning of May 2018. Work is ongoing, though the stairway has been fully rebuilt and is ready now. The entire villa has been restored, cleaned and repainted inside and out. We are returning in November 2018 to supervise the remaining recovery work and complete our "task list". We have delayed opening our home for guest rental until January 2019 because we want to be sure every detail is attended to. We are currently (July, 2018) accepting reservations for January 2019 and beyond. We are happy to share Skyloft with you. Welcome!

There are many wonderful homes and cottages for rent on St. John. We designed our home to include the best features from all of our rental and camping experiences over the years including upscale villas, Maho Bay Campground, Cinnamon Bay and Concordia Eco-retreat. Skyloft features affordability, privacy, outdoor living and cooking, screened-in sleeping, two spectacular outdoor showers, a small private pool, unbeatable views and a naturally shaded, second deck at the edge of tropical woodland.