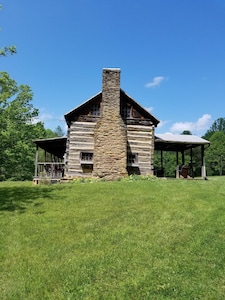 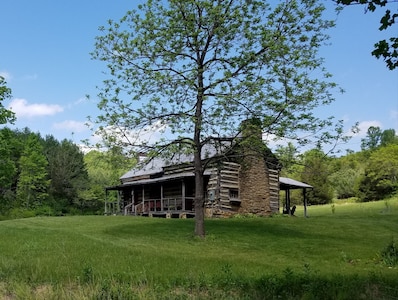 We (Kerry and Libby) are retired and live on the property adjoining the cabin, which we bought to preserve its historic presence. The original owner built the cabin and raised ten children there before leaving home to fight for his country in the Civil War. He died at Gettysburg and was buried there, although there is a marker in the family cemetery located on the hill above the cabin. The property is in the process of becoming a working farm again, and work is the operative word! Between the two gardens, chickens, cats and Sarge, the rescue dog, not much "retiring" goes on in this holler, but we hope you'll enjoy the respite and slower pace as much as we do.

Libby Legg purchased this Cabin in 2017

The cabin sets beautifully between the mountains, and affords its occupants the chance to slow down, listen and absorb the sounds of the creeks, the crickets and other wildlife. Maggie's Farm is an opportunity to unwind, unplug and mend. While it does have modern "amenities" like electricity and plumbing, it doesn't have cable, wifi or other distractions, giving ample opportunity for families to regroup, revive and renew their relationships.

The outdoor covered area would provide a wonderful area for groups to pursue a mutual hobby such as quilting or other crafts, and is well-lit with new electrical outlets for equipment and projects. Evenings on the front porch swing or on the glider on the back porch are sure to be a favorite time, before gathering around the fire pit to share tales and beverages.