Villa with Private Pool and Beautiful Sea and Mountain Views 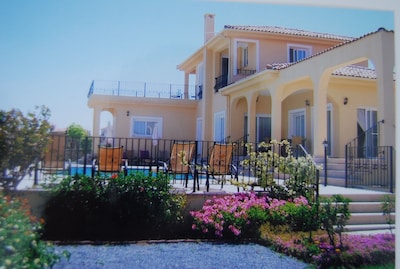 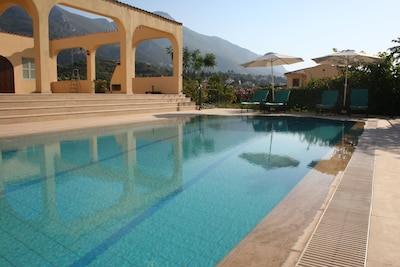 I was brought up in Nicosia, the capital of Cyprus. My father worked for the British Government when Cyprus was a British Colony. My husband and I now live in Sutton Coldfield in the West Midlands. We have 2 children, a son and a daughter and 4 grandchildren. My husband is retired, but I still tutor Mathematics. We are both keen tennis and golf players and I play at two bridge clubs. We have had both cats and dogs over the years, but as we travel quite a lot we have decided not to have any more just now.

When we decided to buy a property abroad it was always going to be in Cyprus. As I lived for much of my childhood in Cyprus I have a great affection for it. We chose Ozankoy which is just outside Kyrenia as I remember as a child going over the mountains to Kyrenia and the sea most weekends. In those days it took an hour and a half , but now with the new road it just takes 25 mins. The particular location for Villa Joanna was chosen for its views of the sea and mountains and its location near Kyrenia and the sea with it's beaches. Villa Joanna was named after my daughter.