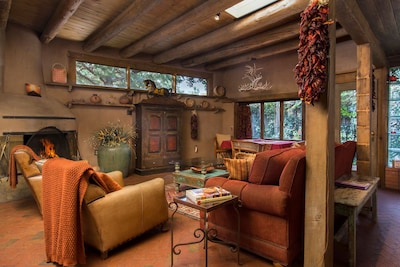 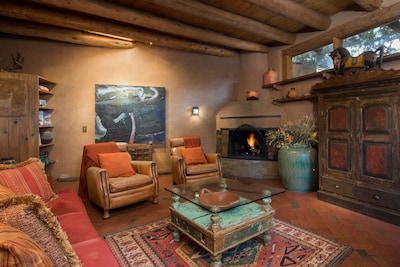 The owner, NOËL BENNETT, has lived most of her life in the Southwest. After graduating from Stanford University, she lived with the Navajo for eight years and authored nine books on Navajo weaving, history and culture. She continues to write and paint from her studios in Santa Fe and in the Jemez Mountains of New Mexico.

NOËL BENNETT purchased this House in 2010

While living in Santa Fe for ten years, in the heat of the summer NOEL would walk her Komondor dog along the Santa Fe river. Always the shady paths and trickling water were refreshing and revitalizing---a stark reminder that water in the Great Southwest is sacred. One day she noticed that the two hand-mudded adobe homes along the river--a home and guest home that had always fascinated her--were for sale! There was no doubt that the location was unbeatable. Once inside, she found the earthiness, solar absorption, and quietness of the authentic adobe to be also irresistible. Since then she and her husband, "SIR DOKTOR" RUSSELL BETTS (International Environmentalist) have worked to remodel the homes to bring them into today's living standards--ever mindful of maintaining their original ambiance.

But there is more! What struck NOËL especially was how clearly the homes manifested Frank Lloyd Wright's architectural style. First there is his signature honey-comb 120 degree angles so reflecting the way humans most comfortably function within architectural spaces. Second, there is his hallmark "continuous space" in which architecture is wielded to blur the line between humans and nature. Having herself grown up in California in a Frank Lloyd Wright designed home, plus having lived with the Navajo for eight years, plus having previously lived in a double-walled adobe, the unique combination of styles and materials ("Imagine! A 'Frank Lloyd Wright Adobe!') immediately felt like home. Over the years, NOËL has pieced together the fascinating history of these homes. Specifically they were HAND-built in the 1950s by Harry Pierson, an Economic Anthropologist/Columbia University Professor and co-author of "Trade and Market in the Early Empires." But fact finding continues: They have yet to find out how much of a hand Frank Lloyd Wright--or more likely one of his Taliesin West apprentices--might have played in creating the dual sense of coziness and expansiveness inherent in this oasis along the Santa Fe River.