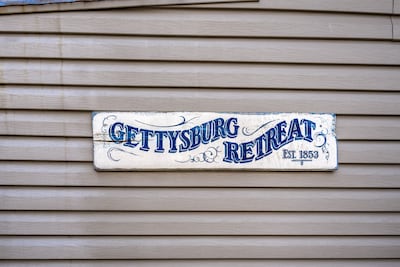 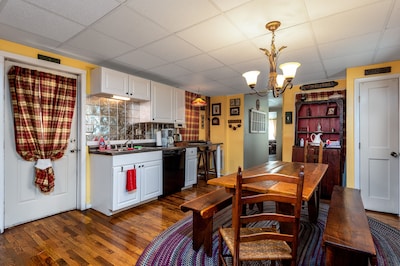 We purchased the home in 2012 and my husband and I have been remodeling it every since. We are DYI's! It has been fun. The house is located at 145 West Middle Street in Gettysburg and is within walking distance to downtown Gettysburg. There is a Trolley that runs in Gettysburg that you can ride for a small fee all day and it even goes out to The Gettysburg Visitor's Center and Museum. So you can leave your car at the house and save on gas while you are here! We own 2 vacation homes now. Lincoln Quarters is located right next door to The Gettysburg Retreat. It is a 3 bedroom 1 bath upstairs apartment. We have the only 2 of the 3 vacation homes in Gettysburg that are both legally open with all of our permits and licences. We do have our Certificate of Use and Occupancy from the Gettysburg Borough and we are in Full Compliance with the PMCA

Sandee purchased this House in 2012

My Husband and I purchased this property because we loved the history behind it and wanted to share with others that love Gettysburg also.

The Gettysburg Retreat is a pre-Civil War 2 story Gable front house. Built in 1853 it was originally owned by William Steinhour. Steinhour owned the house until 1859, then sold to Henry and Mary Zeigler in 1860, then repurchased by William Steinhour in 1864. It was later bought in 1868 by William Z. Little and then sold in 1872 to James Caldwell. The house was later passed down to Little's heir in 1873. One thing interesting about the house, is in the first 2 blocks of West Middle Street. You will find several Civil War houses towards downtown Gettysburg, but as you reach The Gettysburg Retreat, the house beside it was the last house in town until you get to Seminary Ridge during the Civil War. The land Gettysburg was founded on was originally owned by William Penn. Penn would later sell the land to town founder James Getty. The Gettysburg Retreat was the 127th lot of land allocated to Getty in the exchange.