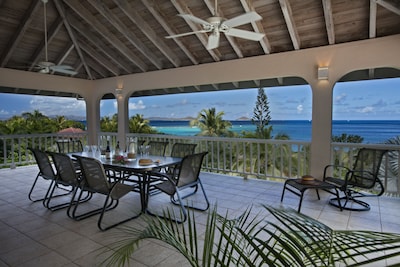 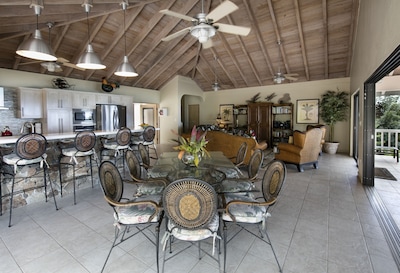 If someone asks you to book through them or pay them directly before you book on Vrbo,report it

One to Five Master Bedrooms All With En Suites, Private Pool And Expansive Decks

We're Brian and Marion MacDonald and we live in Toronto with our daughter. If you have any questions about Adagio please don't hesitate to contact us at bjmacdonald@rogers.com.

Brian MacDonald purchased this Villa in 2002

Marion and I first visited Virgin Gorda in October, 1996 as a result of a corporate get-together. On that trip we rented three villas for about 20 people and had the time of our lives. We were seasoned travelers by that time and had been to many of the islands in the Caribbean but the charm of Virgin Gorda and the beach at Mahoe told us that we had found paradise. We vowed to come back as soon as possible. Several months later, a friend of ours called to say that a lot had been released for purchase. We bought the lot virtually sight unseen and on the basis of a site map. After several years of return visits and winding our way through the building approval process, we obtained government permission to build on the lot. Needless to say we came down every few months to renew our vision in terms of the villa layout and overall design. The design process was aided by our stays at some of the other villas at Mahoe Bay. We borrowed concepts and design ideas from many of the other villas on the island and we thank those villa owners for their efforts in having gone ahead and forged the way. The result is that our villa was the last one completed within the Mahoe area and incorporates the best ideas from many of the other villas as well as our own sense of lazy island living. After several years of work with our builder on the plans for Adagio Villa in 2000 - 2001, we began construction in April, 2001. Adagio was completed in February, 2002. During Christmas 2001 and February 2002 we took delivery of several containers of furniture and appliances from Miami and Canada and set to work decorating the rooms in a style that is very much Caribbean. In March 2002 we proudly opened the villa for guests. The grounds and gardens were landscaped and planted in 2002 and 2003 and are now fully mature. We hope that you will take some time to stroll through the gardens as we've planted many native plants and other tropical species.

Our primary concern in designing the villa were to maximize the free flow of space to accommodate larger family and group vacations; provide our guests with a very luxurious setting; ensure our guests had private areas to escape the pressures of larger groups; provide a safe environment for children of all ages; and make sure the villa was handicapped accessible as we had elderly parents at the time. Please contact us at bjmacdonald@rogers.com and we can assist in making the right choice for you as a couple or as an extended family.