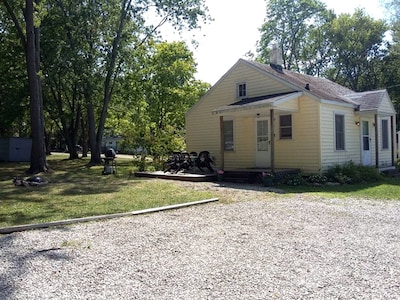 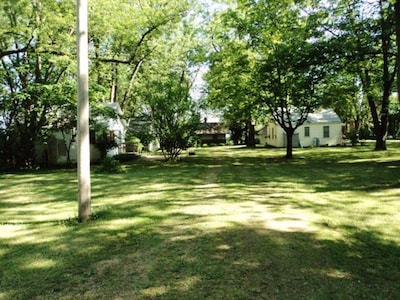 BRIEF HISTORY Rock Harbor Cottages has been in the family since 1946. When the Marsho Family purchased the property it was a pear orchard. Down by the dock in the hedge row remain the last of the pear trees. Everything on the property was built by the family. Everything you see has a history and a story, even the large maple trees. Frank Marsho (Pam's Grandfather) hand dug the saplings from behind the Mayfield Village Service Dept and planted them for generations to enjoy, now many of them are 60 - 80 ft tall. The current owners, Brad & Pam Miller, acquired the property in April of 2013. The first building built was the Boathouse by the dock which actually is a 2 story building. The upper level was divided by curtains into 3 bedrooms. To get downstairs you have to go through a trap door in the floor and down a flight of steps. The lower level contained the kitchen with a wood burning stove and living area. Over the last summer we worked hard and restored the interior to its original wood and created a nice little hangout. If you ever see the door open come on in and enjoy the view with us. The next addition was the original dock which is actually still visible underneath the present dock. It was built by stacking stones out into the water and was eventually topped with concrete. In 1969 a storm had decimated the harbor, destroying the beach at the property and the dock. In 1971 the first posts were driven for the dock that still stands today. The second building constructed was the "Old Cottage" or #3. It was built in the early 1950's and was actually ordered from the Sears and Roebuck Catalogue. Arriving as a pile of precut lumber, the family pulled together and put it up quickly. The interior is small and quaint and is now only rented on a seasonal basis. "Aunt Ann's" #1 and the "New Cottage" #2 were both built together in the mid 1960's. Both cottages are basically the same design with the new cottage having an extra 200 square feet of space.