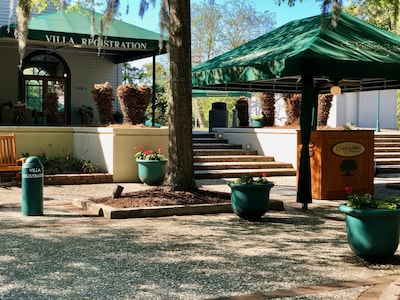 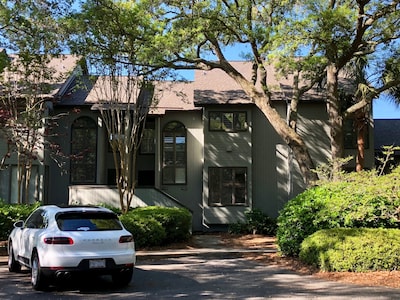 All bedrooms have full bathrooms. There are two master bedrooms with king beds. Both master bathrooms have walk-in showers with built-in seating. The third bathroom has a tub/shower with sliding glass doors. One master bedroom is on the first floor. The floor plan provides excellent privacy for you and your guests or family members.

We both grew up in the Northeast, migrating to North Carolina in the late 1970's, in large part to get away from the long and dreary winters! We 'discovered' Kiawah in the early 80's and fell in love with the island and the surrounding area. After visits to many other islands along the Atlantic coast, we found none we liked as much as Kiawah. We bought our first Kiawah property in 1992 and our current villa in 2004. Kiawah has been our home away from home and we cherish the memories of our times there. It has been a wonderful place for exposing our daughter to the wonders of nature and to healthy, active vacationing as she has grown up and become an adult.

Jan Henshaw purchased this Villa in 2004

Kiawah Island is simply a beautiful barrier island which has been very carefully developed to preserve that beauty. Low density development has been a hallmark of Kiawah from it's original conception to the current day. Preservation of natural habitat has insured that the island is rich with wildlife, much of which is visible to the casual observer. Kiawah's 10 mile beach has been rated a 'top ten' beach in North America by The Travel Channel. Thirty miles of well maintained hiking/biking trails make the entire island accessible to even the unskilled rider. The resort features five public golf courses including the very highly rated 'Ocean Course', a highly rated tennis facility, a five star hotel and spa, and a good assortment of restaurants at various price points. Whether one is seeking a naturalist experience or more civilized indulgences, Kiawah Island is a terrific vacation venue for people of all ages.

Location, location, location! Villa is situated close to the walking bridge over the lagoon, beyond which is the access boardwalk to the beach. This means a 4 minute walk to the beach, as well as a 4 minute walk to the family and children's pools and the Nature Center at the Night Heron Park pool complex. After time on the beach or at the pools, the closeness of the villa is greatly appreciated, especially if you are carrying gear, are pushing a stroller, or have a young child walking with you.