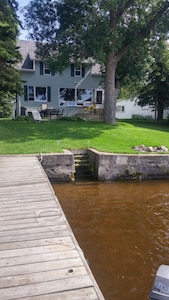 Hosted by Terry and Bill Lahmayer

About Terry and Bill Lahmayer

We (Bill and Terry), purchased The Lake House when we were in our early twenties with a 1 year-old son. Both born and raised in Wisconsin, we moved to Ranier in 1983. Originally we planned to stay in the area for just a "few years", but the people, Ranier, and Rainy Lake captured our hearts. We decided to stay and added two more children to our family along the way. In 2011, we made the very difficult decision to relocate to the Duluth area, but decided to keep our Rainy Lake home as a long-term rental. Because we missed spending time there, we recently decided to try operating a vacation rental instead. That way, we could give others the opportunity to enjoy it short-term, and still have time there for ourselves. I think you, too, will find that it's a very special place.

Terry and Bill Lahmayer purchased this House in 1983

While looking for a home to purchase after our move to the area in 1983, we couldn't find anything that really appealed to us -- until this one. In spite of its unattractive exterior at that time, and it's need for a great deal of work, we fell in love with the place the first time we saw it. The vaulted ceiling, huge living room, massive fireplace, second story railing/hallway overlooking the main living area, and the darling little window --- were just too much to resist! We spent the next 30 plus years updating, replacing and remodeling. With the exception of one of the bedrooms, every single room was taken down to the studs and renovated. Also fascinating to us was the history of the house. Built in the 1930s by the Trompeter family, the house became a restaurant for a number of years in the 1950s. The Twin Elms, as it was called, was known as the -- "home of hot biscuits and honey"! We have incorporated the home's history into it's décor, along with photos of Ranier in it's earliest days. In those formative, wild years, there were many houses of "ill repute". However, our house was not one of them, lol! But even more captivating than the house and it's history, was the beauty of Rainy Lake. It's medicine for our souls and we are so thankful that the Lord has blessed us with it for all these years.

With the water's edge just steps from your door, there's no hassling with the hauling of coolers, chairs, toys, blankets, etc. up and down a long stairway or over rocky ground to get from house-to-water. The yard, the dock, the water --- it's all right there! And hearing the gently lapping of the waves at night, is so wonderfully calming. Stunning sunsets never fail to dazzle, no matter how many you've seen. Hearing the call of a loon on a quiet summers evening is a special kind of music. Watching the mama ducks paddle by with their babies in tow, as well as seeing geese, pelicans, seagulls and sometimes beavers and otters, is so rewarding. The sight of a Bald Eagle circling overhead and swooping down to catch a fish in it's talons is amazing. And then there are the Northern Lights! They are not a regular occurrence, but if you happen to catch them, they will take your breath away. Other things we have enjoyed immensely... the privilege of having a boat tied up to the dock, ready to go out for an evening of fishing just down from the Ranier bridge... lounging around on the dock and watching the kids play in the water... And one of my very favorite activities --- having a campfire at the waters edge on a calm, summers night. It can't be beat. However, I have to be honest and say that the mosquitoes can be challenging, especially during the first half of the summer. Fogging the yard and wearing a good bug dope will make a huge difference. While wonderful in many respects, we need to remember that no place is perfect!