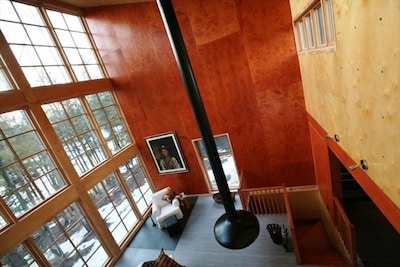 Chill on a Private Lake in Magog, Canada!

The owners are the 8th generation descendants of a German soldier of the American Revolution who, in 1777,was supplied by a German prince to the British King George III for the defence of Canada and after the war settled in that part of Quebec.

purchased this Cabin in 2009

It is set in a picturesque corner of the country called the Eastern Townships, where groups of Canadian Indians, French Canadians, United Empire Loyalists and Irish immigrants have successively settled over the years. A lovely region just east of Montréal, replete with artisan shops, vineyards and outdoor markets located in quaint villages amidst a stupendous setting of forests, lakes and mountains.

The Lounge Cabin offers a charming place to stay and unwind on your holiday or for a weekend. Recently built to a high standard offering 3 en-suite bedrooms and a mezzanine sleeping space it sleeps up to 8 guests. We have 3 ensuite bedrooms all with a double bed, 1 mezzanine space with double bed.