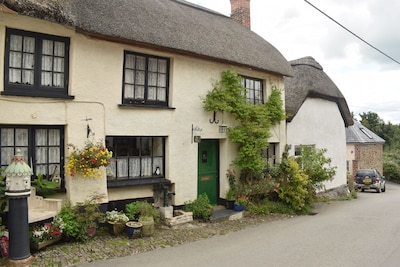 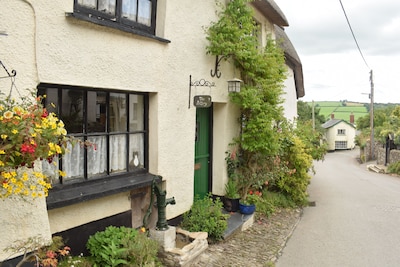 A self catering rental with pretty cottage gardens,outside seating and barbecue.

double
There is a travel cot

Both bedrooms are light and airy with quaint cottage windows and window seats. The floors are carpeted in both rooms. Bedroom 1 has a pine double bed,bedside tables and lamp,chest of drawers,wardrobe,dressing table and television. Bedroom 2 has a pine double bed and bedside drawers with lamps, large chest of drawers,chair and hanging space in cupboard. Both rooms have fitted storage heaters ensuring you have a cosy night. Bedding and bedlinen is provided. There is a hairdryer in the bottom drawer of the chest in the bedroom. Mind your head on the beams!

Hosted by Viv and Tony Killeen

Ask a question
Member Since 2008
Viv and Tony Killeen is a Premier Host·The owner or manager of this property consistently provides great experiences for their guests.

About Viv and Tony Killeen

We currently live in Halberton, within half an hour of the cottage.

Viv and Tony Killeen purchased this cottage in 2006

We had often visited North Devon when our children were young. Eventually, we decided to buy a holiday home there. The Pottery was the first of many that we went to see - none of the others felt like a home from home. We bought it, then decided we would let others enjoy it too. We have been letting it for holidays since 2008.

Owning a piece of history brings responsibilities, which we take seriously. The roof was completely rebuilt in 2018, a job that was several years in the planning, with four solid months of work by Shaun, our master thatcher, and his brothers Derry, the joiner and Marcus, the builder. The roof is the shape it was when it was last completely replaced, probably over 100 years before. Parts of the old structure remain where they were, as required by the listed building consent, but the framework is up-to-the minute specification, and will be good for at least another century. The thatch was fitted to it by Shaun in exactly the same way as the very first was fitted, some 350 years earlier, and using tools those craftsmen of old would have recognised. More recently, we have replaced the bathroom suite, not an easy job in such a building, and updated the kitchen area. The result is a comfortable blend of the old and the new, still with the charm of the original (and low beams for the unwary!)