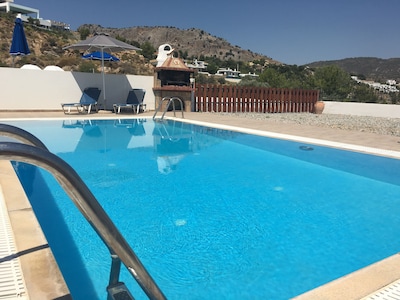 Both my husband's grandparents are born on the island but moved later on to Egypt. Yannis, my husband, due to the political situation in Egypt at that time, moved to Athens in 1962. Then he came to Brussels, where we met. Lucky me ! I myself am Belgian. We have visited Rhodes frequently, especially when our 5 children were young. As most of the children they adored swimming and playing in the so beautiful Greek waters. Having visited Lindos several times, we decided to purchase a house there, having in mind to move in permanently in the future.

Linda Joanna purchased this villa in 2007

At the house the main attraction is the swimming pool and the sea, at only 150 m distance from the beach where you can practice some water sports. At Lindos beach in the end of a deep gulf, with clear waters, are possibilities of every kind of sea sport. Still at Lindos, the other point of interest is the hill itself, on top of whom there is a crusaders' castle (dating from the 15th century A.C., which has been built on top of an ancient Greek temple dedicated to Athena). The view from the top is breathtaking, (worldwide famous, you can find out in Internet sights: Google,Images,Lindos, Rhodes) especially from the side overlooking the open sea, over steep hard rocky cliffs colored in yellow and pink. When the sun rises and up to 10:30 am, the colors of the rocks are very intense, due to the fact that the sun illuminates them (which is not the case from midday on since they fall under the shadow). I always visit Lindos in the early morning to avoid being disturbed by the other visitors and to avoid heat. Although there is a protective wall, since small children can be unpredictable, you should maybe be nearby.

There is no road in between the house and the beach (at about 150m only), so children can move freely without the risk of being hirt by a car or motorcycle.

Languages:
english, french, dutch, greek, I have a passive knowledge of German and Italian.