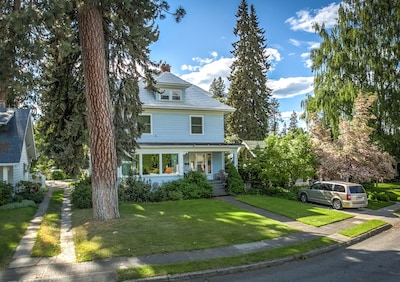 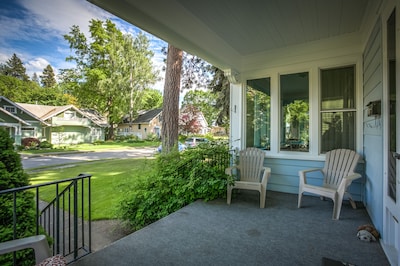 Dr Donald M. Gumprecht and Dr Jane Gumprecht purchased this house in 1951 and raised a family of four: Donald George, Ruth, Tom, and Ernest. The boys went on to become physicians and Ruth's daughter, Heather, is a physician as well. Interestingly, two prior doctors had owned the house earlier in the 20th century also. In order to keep the house in the family and preserve it for family gatherings, the Gumprecht children have decided to offer it for vacation rental. As such, it is suitable for use by other parties with similar needs, particularly families with children. Many small Gumprecht feet have padded their way to the beach, the park, and downtown.

Roni Young purchased this House in 1951

The city of Coeur d'Alene grew next to Fort Sherman out of which eventually was subdivided the Fort Grounds neighborhood. This explains why the location of the Doctors' Inn is so close to all of the attractions that make Coeur d'Alend famous: the beach, the park, excursion boat rides, downtown shops and eateries to name a few. Of necessity everything was within walking distance in the early days and it remains so today.