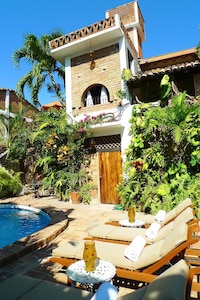 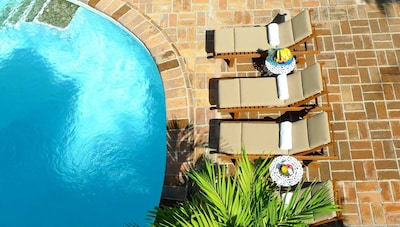 I was born in Mexico City, says our host, but from an early age I moved here, right after my mother died. It was my uncle, Xavier de la Torre, who brought me to Vallarta to live with him. The fame of Xavier de la Torre grew when pictures of Elizabeth appeared in Vallarta displaying their designs. Xavier was very close to Rock Hudson, an endearing friend of Elizabeth, so it was not long before she also became part of her uncle’s group, an incredibly creative man and a celebrity in Vallarta. From fashion to interior design and from there to sculpture or cooking. Everyone knew him and he knew everyone. His home (Villa Leonarda) was a true creative mecca. Fairy godmother My relationship with her was very special and unique, explains Sergio. How did she become my godmother? In a very natural and innocent way. One day, my uncle showed me a picture of her and commented: Look Sergio, your godmother. I just smiled and answered: Yes, I want Elizabeth to accompany me on my First Holy Communion. He replied: Very well, the next time you see her, ask her if she wants you to be her godson. And so it was. The desire of the little boy became a reality in a mass officiated in the Parish of Guadalupe, in front of a few assistants. She asked me to call her “madrinita” which is little godmother. No one else call her that, just me, Sergio remembers. Would you like to know more? Continue on the link below ... https://www.villaleonarda.com/libro-amarillo/

Jeff Castaneda purchased this Villa in 1956

I often wonder when Vallarta’s destiny was written, says Sergio. Could that has been when Tennessee Williams wrote The Night of the Iguana imagining a magical place in Mexico? or when John Huston decided to film the movie at the port? Or when Elizabeth decided to accompany her husband during the filming? Anyone who has been the true detonator, the history of the port changed forever. Of course, don’t forget the unique geography of this place. It’s one of the most beautiful bays in the world. The water is temperate, the sierra – which ends at the sea – is majestic and its inhabitants are extremely friendly, Sergio describes with great pride. In the end I think that everything contributed to create the myth of Puerto Vallarta. Located in downtown Vallarta, in the colorful and lively area known as Gringo Gulch, Villa Leonarda is a quiet oasis for a perfect vacation in a casually stylish ambiance. Built alongside the Cuale River, home to majestic iguanas, egrets and parrots, this rental villa, ideal for a family or a group of friends, is within walking distance from the boardwalk and main beaches, terrific restaurants and quaint shops. Imbued in a star-studded history, the house consists of two buildings where period and custom-designed furniture pieces alternate with artworks signed by renowned Mexican contemporary artists. Three dining areas and a high-ceiling living room with a fireplace complement five spacious, well appointed rooms, with their whimsically decorated bathrooms. Once a favorite hangout for Elizabeth Taylor and Richard Burton, today Villa Leonarda offers all the comforts of world-class accommodations.

Villa Leonarda is an oasis in the middle of the City. When looking from the outside you never imagine what's hidden behind its walls. One of the great classic villas from the jet set days of the 1960s, recently updated with an urbane sophisticated style and upscale art and furnishings, Villa Leonarda evokes a glamorous age when Hollywood ruled Puerto Vallarta. Behind the stately hacienda walls, you will step into a magical world of beauty, charm and grace. Villa Leonarda offers a unique experience that connects with the City history in a traditional Mexican architecture but renewed, fully equipped to provide a comfortable and sophisticated stay. My uncle Xavier was of the zodiacal sign Leo, so all his friends always gave him figures of lions. That’s why he named his house “Villa Leonarda”. And although it has undergone some transformations, now it is the oldest one that exists in Vallarta. The house was abandoned some time after his death. I came from time to time, but on one of those occasions the house wouldn’t let me go. Elizabeth used to visit his house regularly. I remember returning from school and there they were all gathered talking. They could be Richard, Elizabeth, Xavier and Burt Lancaster, for example. In addition to being an extraordinary designer; he had an outstanding talent to create friendly atmospheres, to cook and to decorate, -the reason why the meetings were always made in Villa Leonarda-. He was a splendid host. There is even a very interesting anecdote about the property. According to my uncle, one day Richard offered to buy it because, apparently, he always liked it more than the one he inhabited, to which Xavier responded in a friendly but definitive manner: Look Richard, you have fame, private plane an extraordinary career and, especially Elizabeth Taylor, but this house will never be yours.