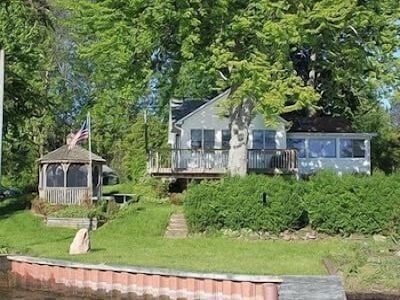 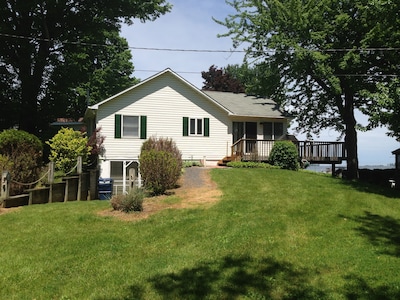 Welcome to the Bayside Beauty!

The home provides 3 bedrooms which accommodate 7 residents. There is an additional 'walk through bedroom with a single bed. A sleeper sofa provides space for two more. Space exists for additional sleeping arrangements if needed.

West Bay has been in our family for 4 generations. What started as a one room bayside retreat has grown over the years to combine the rustic charm of the original cottage with the modern amenities which make living here comfortable. 'Sant Cottage' as it was originally known has been the summer retreat for one of Fair Haven's founding families. Generations of the Sant family still live around Little Sodus Bay. West Bay was built for Raymond S. Sant, one of the most influential figures in the development of Upstate New York. Ray Sant was a soldier and educator whose foresight converted rural New York's one room school system into the the centralized school system that exists today. Ray Sant's interest in Fair Haven and Sterling lead him to chronicle its' development in several books tracing the history of families and businesses in the area. West Bay is where he found his inspiration.

What makes West Bay special? It's the slower pace, the relaxed atmosphere and the abundant variety of activities.