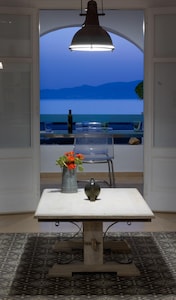 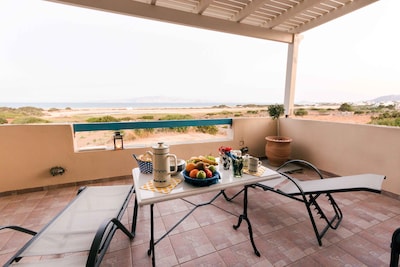 All bedrooms have large wardrobes and there is plenty of space for your clothes, shoes and personal belongings.

George is a professional music writer, performer, orchestrator and music producer. He lives and works in Athens, where he owns and manages a recording studio. He has also studied medicine in the university of Athens. Both his parents come from Naxos, so he has spent nearly every summer of his childhood and teenage life there, in a litle stone built cottage, very close to where Kamari villa is now. He inherited the land from his beloved late aunty Irini and decided to built the villa, initially designed to be a residential recording studio for overseas artists. After spending a couple of summers in the villa, he felt that this is more of a home than a professional facility, full of beautiful uplifting energy and an incredible peaceful aura, meant to be enjoyed by everyone that loves nature and the Greek Islands.