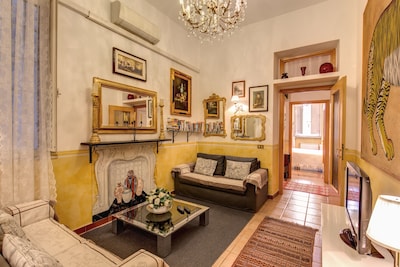 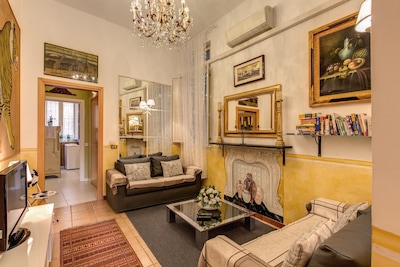 Natalia and Walter worked for Alitalia Airlines for more than 25 years. Natalia prior to work at Alitalia lived for more than a year in London, studying and working in a tourist agency. She speaks excellent English, understands and speaks Spanish and can 'get by' in French but also a real understanding of just what travellers need when they’re renting a short-term apartment in a foreign Country . Walter worked as well as pilot in Alitalia for more than 30 years, in the photo above you see Walter piloting Pope Giovanni Paolo II to Mozambico in 1988. They both attended courses of the History of Roman Art, which allowed them to get to know the city very well and they will share their knowledge with you at your arrival. At check in they will personally welcome you and spend time to guide you in programming your vacation. You will have the feeling to meet a personal guide, that help you at 360' in discovering this big city so full of history, and save so much time that normally takes to a person that is in town for the first time The twenty-five years Natalia spent traveling from one country to another gave her an opportunity to learn about the ways and customs of many countries and enhanced her natural predisposition for interpersonal relationships; she always succeeds in establishing an immediate, friendly relationship with her guests. Since 1995, Natalia attended the 'Academy of Decorative Arts', discovering a hidden talent for painting and decorating that she never imagined before. She now puts this talent to use personally decorating her apartments. In fact, the tiles in the kitchens and the tabletops in the dining areas of her apartments are all hand painted as well as the tromp l'oeil paintings, which gives each apartment a unique touch.

PLEASE SPEND FEW MINUTES TO READ THE HISTORY OF THIS HISTORICAL BUILDING: THE HOUSE OF CHARLES IV OF BOHEMIA: there is a STORY regarding the founding of the Hospital of the nation of Bohemia, which was found at number 132 via dei Banchi Vecchi. As the legend goes, Charles IV had promised Pope Urbano V - in occasion of his coming to Rome in order to be crowned king in 1355 - to not enter the city before the date set for the ceremony. However, unable to resist his desire to visit the Holy city (he was staying with his entourage at Prati di Nerone), he disguised himself as a pilgrim and was able wander about Rome for several days. He stayed in this building that he later acquired, designating it as a hostel for the pilgrims of his nation. The plaque that is still found on the building is dated 1357 and refers to the second visit of the King to Rome, when perhaps he acquired the building and the hospital founded. This property is a stone throw away from major important sites: Navona 600 mt, Campo dei fiori 400 mt, Pantheon 600 mt, Piazza Venezia 700 mt, Basilica San Peter 700 mt, Castel Sant'Angelo 400 mt.

Our Guests will enjoy a complete privacy and independence with the feeling to have a home away from home, but with the confidence the they can count an always available assistance from us.